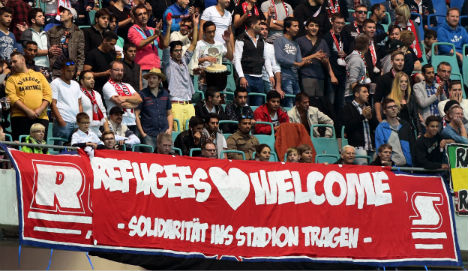 Fans display a pro-refugees banner at a game between RB Leipzig and SC Paderborn on September 11th. Photo: DPA

The logo will appear on the left sleeve of each club's shirt and is a joint initiative between logistics company Hermes, who have waived the right to have their logo displayed for one weekend, and German daily Bild.

“We want to make it clear that everyone has to help, when and wherever they possibly can,” said Bayer Leverkusen's director of sport Rudi Völler with football fans urged to get involved with helping provide support for refugees.

Germany is dealing with a flood of immigrants who travel up through the western Balkans and southern Europe from war-torn countries with 20,000 arriving in Munich last weekend alone.

Individually, most Bundesliga clubs are either setting up or supporting initiatives to help the refugees.

Bayern Munich have pledged €1m and are setting up special coaching courses to provide meals, German lessons and equipment for refugee children.

Wolfsburg has invited 1,200 refugees to Tuesday's Champions League game against CSKA Moscow and a euro from each ticket sold to the match will be donated to a charity supporting immigrants.

Last week, the German Football Association (DFB) announced a three-year extension to their “1-0 for a welcome” programme, which sees some 600 clubs involved with projects to integrate immigrants through football.