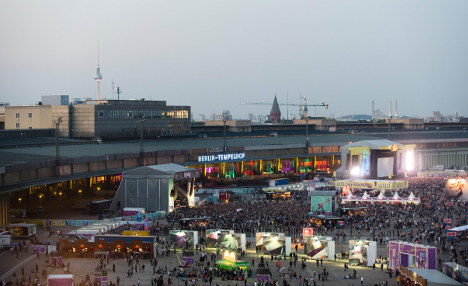 As the former airport winds down after last weekend's Lollapalooza festival, 800 refugees are set to move into one of the former hangars.

A heated airdome will be erected inside the hangar, and portable toilets installed for last weekend's festival will remain in place for asylum seekers to use, Müller explained.

Those staying at Tempelhof will also have access to sanitary facilities at the nearby Columbiabad swimming pool – with shuttle-buses provided to and from the pool.

The eventual aim is to transform two of the former hangars into accommodation blocks, Berliner Morgenpost reports.

Berlin's Tempelhof airport closed in 2008, after over 80 years of service.

The airport's original terminal was built in 1927 and was reconstructed by the Nazis in the 1930s.

At over 300,000m², the main terminal is one of the largest buildings in the world.

During the Berlin Blockade in 1948 and 1949 Tempelhof played a key role in the Allied Forces' famed Berlin Airlift.

The Airlift saw over 2.3 million tonnes of food and fuel delivered by plane into the western part of Berlin which had been blocked off from the rest of Germany by Soviet troops.

Tempelhof continued in operation until 2008, when protests failed to stop the airport closing down.

The grounds – named Tempelhofer Feld – are now used for a variety of festivals, public events and recreation.

'Up to a million' refugees could arrive in 2015

With unprecedented numbers of people seeking refuge in Germany – and newest estimates suggesting up to a million could arrive in 2015 – local governments are struggling to house the new arrivals.

Those seeking refuge in Berlin register at the city's Health and Social Affairs Administration (LaGeSo) – but the centre has become increasingly overwhelmed by applications,

“We can only register between 100 and 150 people a day,” a LaGeSo spokesperson told the Berliner Morgenpost. This means those arriving in Berlin now face long waits for registration.

At the moment, Berlin's largest emergency refugee camp is in the Schmidt-Knobelsdorf barracks in Spandau.

Around 1,700 people – including 250 children – currently live in buildings and tents on the site, and are cared for by doctors and nurses from Berlin's Charité University Hospital.