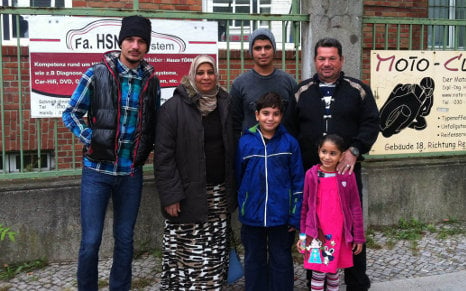 Laith and Nada Majid with their children in Spandau, Berlin. Photo: Jörg Luyken

There is nothing in particular to distinguish Laith Majid, his wife Nada, and their four children from the other refugees at the Schmidt-Knobelsdorf Kaserne, a refugee centre at a former barracks in Berlin's western Spandau district.

Like many of the other refugees there, they chatter away to one another in Arabic, wear clothes donated by locals, and queue up for meals at the canteen while their children play with toys on the grass opposite.

Their story is all too familiar for hundreds of thousand of people who have fled the Middle East for a safer life in Europe.

But circumstance made Laith's face a symbol of the suffering and anguish involved, when a New York Times photographer caught the moment he arrived on shore in Europe and broke down, hugging his children to his chest.

Fleeing for their lives

Until a month ago, Laith and Nada were living a daily life that has become all too normal in Baghdad.

Although educated and successful – he is an engineer, she is a teacher – they were trying to raise four children against a backdrop of sectarian violence and bombings against civilian targets.

Despite their having nothing to do with politics, their own lives had also come under direct threat.

“There is a mafia that controls the streets of Baghdad,” Nada told The Local.

“They came to us and told us ‘if you don’t give us money, we will kill your children.’ At first we paid, but they kept coming back.”

“When we went to the police they said ‘what can we do about it?’

“I thought that if we stayed, my children would be killed in front of my eyes,” Nada explains.

So the couple put 20 years of savings into an expensive and dangerous journey that would take them through war, across a sea and under numerous border controls.

A flight north to the Kurdish capital city of Irbil was followed by a three day bus journey through Turkey until they arrived on the western coast. There they met a smuggler whom they paid $1,200 per head to be taken into Greece.

The smuggler arranged for them to be taken by boat to the nearby Greek island of Kos.

In the middle of the night they were put on a dinghy made for four people along with seven other refugees – one of whom was told to steer – and pushed off into the water of the Aegean Sea.

“He didn’t know how to drive it,” Nada remembered of the refugee steering the vessel.

“For the first 20 minutes we were going round in circles. We said we wanted to go back, but he refused.”

Eventually the man worked out how to go in the right direction.

But the engine increasingly lost power and as the boat moved slower and slower, water began spilling over the sides.

“It was cold and wet,” says Nada. “We thought we were going to die. We prayed to God to save us.”

But they could see the lights of the Greek island and as they drew closer their hopes were raised. Still more water washed in, weighing the boat down.

“Daniel [Etter, the photographer who took the picture] could see us and was taking pictures, although we didn’t know it at the time,” Nada relates. “When we got near the shore he came down and helped to pull the boat in.”

“When he took the picture we were thanking God – and thanking the journalist – for helping us survive.”

The photo didn't just cause a storm on social media in Europe. Nada showed The Local pictures of demonstrators in Baghdad, holding the picture with the words below reading “This is what our government does to its people”.

After resting in Kos, the family took a ferry to Athens. From there they arranged with smugglers to be taken to Germany.

This time they would be transported in the back of a truck – at a cost of €1,500 per head.

They were shut in the back and were only allowed out when it was dark. Occasionally someone would open the door to give them air and would provide them with a bit of food and water.

After a few days, the driver opened the door for the last time.

“He said 'get out, you’re in Germany now.' But we didn’t have any idea where we were. We didn’t know if we were in the right place,” Nada says, her voice rising.

“We walked until we came to some buildings and asked. And the people there said ‘This is Berlin'.”

“We were in Berlin, we were in Germany.”

Even as she says it now, Nada seems hardly able to contain the excitement.

Laith Majid said Thursday he's been overwhelmed by the reception his family has received in Germany. “People know the meaning of love.”

That was two weeks ago. Now the family is trying to adjust to life in the camp they have been placed in – an old British military barrack block.

The building is warm and clean, says Nada, and they get three meals a day.

“But the children always say ‘we miss your cooking!'” Nada says.

Now the family dreams of having their own house with their own place to wash.

The two oldest sons, Mustapha (18) and Ahmed (17), are football mad. Although Spanish football is their favourite, they are big fans of German champions Bayern Munich.

A mention of Berlin’s own (much less successful) Hertha BSC draws a blank. But besides wanting to learn German, they say they want to find local clubs where they can play.

The younger two, Taha (9) and Noor (7), are bubbly and outgoing. Noor has a favourite cuddly toy which she eagerly shows to visitors.

But the family knows that despite everything they have gone through, the road ahead is no less challenging.

“We need to build our lives again from zero,” Nada says. “We left what we had in Baghdad. I left my mother and my family. Now we have nothing.” 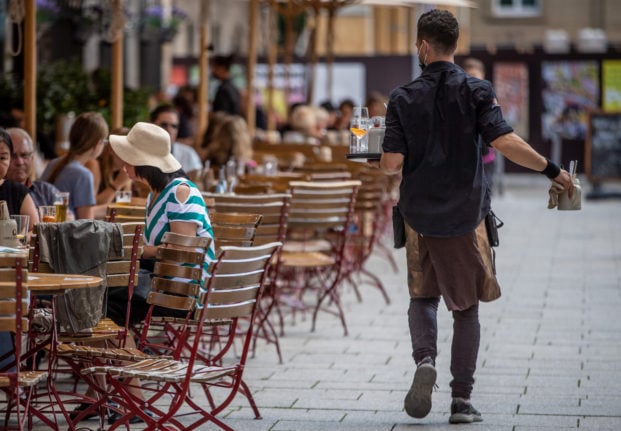