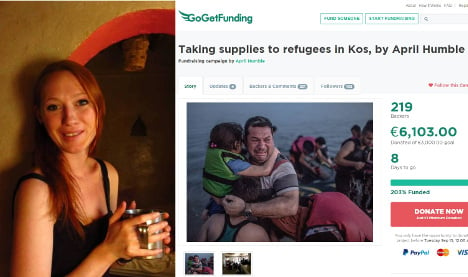 Around 50,000 people sought refuge in Greece in July alone, according to the UN Refugee Agency.

For a country which received billions of Euros in bailouts this summer, the economic impact of these refugees is vast – and on islands such as Kos, residents are joining forces to help support the new arrivals.

April Humble is making the trip all the way from Berlin to Kos next week to work alongside local volunteers.

'Someone needs to step in'

Originally from Scotland, Humble has lived in Germany for the past three years.

Alongside her work on the social impact of climate change, she writes for Statewatch, openDemocracy and several other refugee groups and journals.

But this month, Humble plans to help refugees on a more personal level. On September 16th, she will fly out to Kos for two weeks, to help bring financial and practical aid to those seeking refuge on the Greek island.

“I'm going out there because governments aren't helping, and there's no aid agencies on the ground,” she told The Local. “Men, women, children and grandparents are actually starving on the streets.”

“Parts of Greece have no medicine on the shelves,” she added. “They don't have the money, and that's a fact.”

With the Greek government unable to provide aid, the task has fallen to local citizens, Humble told The Local.

The volunteers she will work with are mainly ordinary locals, “who are really saddened by what's going on, and are doing their best to keep people alive and healthy.”

“It's quite intense, and quite brutal at the minute,” Humble explained. “Somebody needs to step in.”

The Red Cross has begun to “scope out the situation” on the Greek islands, Humble said. However, she added:  “sadly, I don't think it's going to be as comprehensive as it should be.”

“It's just huge,” she said, “and I don't think they've got the resources to create sufficient, appropriate infrastructure on every single island.”

Humble set up a GoGetFunding page in late August – and was overwhelmed by the support it received.

In just a few weeks, the page has already received over €6,000 in donations, a figure she describes as “completely bonkers.”

“People have been ridiculously generous,” Humble said, explaining that people from across the UK, Europe, USA, Canada and Australia have all stepped up to lend their support.

She'll use the money to buy essential supplies for refugees in Kos, including food, water, clothes and sanitary products.

Everything will be bought on the island itself, supporting the Greek economy, and Humble will buy supplies under the close guidance of local volunteers and refugees themselves.

To tackle the crisis in the long term, border controls across Europe need to be relaxed, Humble believes.

“No other continent in the world has fortified itself,” she explained. “They need to start taking down 'Fortress Europe.'”

The Local asked Humble whether she thought Germany in particular could do more to help.

“I think all of Europe needs to be doing more,” she admitted.

But Germany's response to the humanitarian crisis has been ” incredible” so far, she said, adding: “It's really set an amazing example.”

However, Germany's acceptance of thousands of refugees won't spell the end of the crisis, she warned – explaining that unless border security is relaxed, “people will still try to come across in rubber dinghies.”

“Europe really needs to create a far more mature and civilised way for people to enter Europe and apply for refuge,” she said. “They should be immediately given refuge, and then their asylum claim should be processed. We shouldn't judge first.”

In recent weeks, Kos has become a focal point in European media as a region where tourism and suffering come into painfully close contact.

The collection of images shows holidaymakers sunbathing on beaches alongside refugees struggling for survival.

For Humble, it's painful to see Europeans ignoring the suffering that happens so close to them.

People allow themselves to see those from other cultures as “almost subhuman,” she said – especially migrants.

“I think a lot of people see them almost as savage-looking,” she said. “They're lookng rough because they've just got off the boat, and they haven't washed in weeks.”

“But because of that, people allow themselves to dehumanize them.”

With the money raised so far, Humble can provide essential items to thousands of refugees. But while money is vitally important, it's not the only reason she wants to make the journey to Kos.

“The second reason for my going is to try and make it more human, more intimate,” she explained.

During her two weeks in Kos, Humble will gather material for numerous reports and articles, which she hopes will make an impression on those outside the crisis zone.

In a world where refugees are being dehumanised, demonised and stripped of their dignity, she wants to bring the suffering closer to home – and convince people that they personally can make a difference.

“These are just people,” she said.

“It's a big, scary, nasty, horrible situation – but it's not so dramatic and so alien that we can't do anything.”