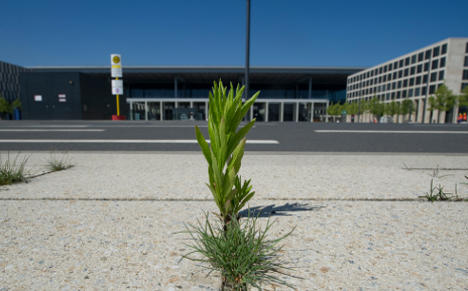 The airport was supposed to open in 2012. Photo: DPA

But while the site has become a laughing stock for Germans, the consortium behind it has turned a disaster into something of an opportunity with guided tours that have become an unexpected hit with the public.

More than one million people have visited the “phantom” facility since the two-hour tours began in 2007.

And interest has taken off since the planners blew past the 2012 opening date, driven by a particularly Germanic love of technology, bafflement at the money pit consuming their taxes, and perhaps just a touch of schadenfreude.

At €10 per person, the tours are a minimal source of income, just as the budget for what many call a boondoggle has ballooned to more than €5 billion — about three times more than the €1.7 billion originally earmarked.

On a recent scorching summer's day, instead of going for a swim in one of the region's many lakes, two dozen paying guests listened in rapt attention to an eye-wateringly detailed description of the technical specifications going into the 21st century airport.

A guide led the group on a coach to a viewing tower, empty gates with expectant jet bridges, a dedicated power plant and the gleaming glass-and-steel terminal building at the heart of the project's woes.

Elephant in the room Problems with the fire detection system have contributed to delays. Photo: DPA

Inside, the smell of sawdust hung in the air, cables dangled from the ceiling and a surprisingly small number of hard-hatted workers, given the building delays, shuffled in and out of the sliding doors.

The squeak of a rolling wheelbarrow, the low moan of a drill and the thud of a distant hammer echoed through the cavernous hall as the guide shepherded the group.

After an hour and 15 minutes on the tour, Austrian retired social worker Sylvia Groth, 60, finally mentioned the elephant in the room.

“Could you please say something about the delays? What led to them, when will the airport open, has anyone been convicted?”

The guide took a deep breath and began to explain serious technical flaws – especially in the fire safety and smoke extraction system which must be able to alert both “flames in an ashtray and flames spreading through the terminal”.

“We had an architect who wasn't a technician,” he added. “And politicians did not pay close enough attention to who was doing what.”

But the problems seem to be too complex for an afternoon stroll. There is no mention of the manager in charge of the ventilation system who was convicted last October of taking bribes, or of the recent bankruptcy of a major contractor at the site, the German division of Dutch group Royal Imtech.

The official opening is now slated for late 2017, although locals say they will believe it when they see it. Guessing the actual inauguration date has become a kind of parlour game in the German capital.

Beyond bus tours, visitors can also sign up for year-round bicycle rides at the site, or a half-marathon in the spring across the wind-swept runways.

A 41-year-old civil servant who gave her name as Dorothea joined colleagues on a team outing to the airport armed with a selfie stick.

“It is rather embarrassing that it is taking so long,” she said. “We wanted to take a look to see if we could figure out what the hold-up is.” Moving on, the tour came to empty lifts quietly shuttling up and down between the departures floor and an underground rail station where a “ghost” train makes the trip into the city centre a few times a day.

Neither carry passengers; they must simply keep moving to avoid falling apart.

A 61-year-old health practitioner named Heidi noted the absurdity of a giant, expensive sculpture of a flying carpet suspended from the ceiling and gathering dust while money poured into the perpetual construction site.

“I wanted to see this chaos for myself,” she said.

“We've become a country where big projects just don't seem to work, whether it's BER or the concert hall in Hamburg,” she said, referring to a similarly long-delayed and wildly over-budget prestige project.

Manfred Mattick, 73, a retired Berlin government worker, came to the tour with his young grandson, whom he called “an airport enthusiast”.

He described the debacle at BER as “rather embarrassing for a country that claims to be a global leader in industry”.
Mattick had his own theories about what had gone so terribly wrong.

“I think the architect had an ambitious vision of a light, airy palace and the technology was supposed to play along. Unfortunately that's not how buildings work, certainly not airports,” he said.

Groth, the Austrian, said later that she found the answers given during the tour convincing but wished the guide had been more forthcoming.

“He should have broached the subject himself,” she said.

“There's been a lack of transparency from the beginning here and sometimes you have to take the initiative in explaining to people what happened.”