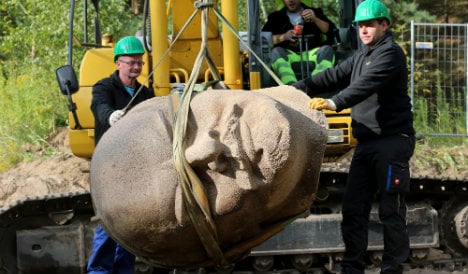 Lenin's head is winched out of the ground on Thursday. Photo: DPA

The 3.5-tonne piece, long buried and half- forgotten in a forest on the edge of the city, will become an eye-catching highlight of a new museum exhibit of key figures that played a role in Germany's turbulent history.

Workers dug up the goateed and bald-headed likeness of the communist leader and used an industrial crane to lift it onto a truck for what may have been Lenin's final journey across the sprawling capital city.

“Welcome back, Lenin,” quipped Gerhard Hanke, district councillor for culture in Spandau city, west of Berlin, where the head arrived in a museum – only slightly worse for wear, missing its left ear.

Hanke said Lenin “wasn't a big man, but a great figure”, as the granite likeness was carefully lowered with a forklift, before Russian and other international TV crews.

The cross-city transport was reminiscent of a scene from the bitter-sweet 2003 reunification comedy “Good Bye, Lenin” in which the revolutionary's head was airlifted by helicopter across the roofs of Berlin, symbolising the demise of communist East Germany.

While that scene was entirely fictitious, the real-life journey of the sculpture of Vladimir Ilyich Ulyanov, alias Lenin, has been no less dramatic.

At the height of the Cold War, which divided the city and the world, the 1.7-metre (five-feet) -high head was part of a statue carved from Ukrainian pink granite that towered 19 metres above East Berlin, framed by Soviet pre-fab apartment tower blocks.

It was designed by Nikolai Tomsky, then president of the Soviet Academy of Arts, and its massive stone blocks were hauled from Russia to the socialist brother-state in a convoy of trucks.

The statue was inaugurated before 200,000 people on April 19, 1970, three days before the 100th anniversary of Lenin's birth, and remained there for 31 years, dominating a square named after the Bolshevik revolutionary.

After a wave of people power brought down the Wall and the Iron Curtain – sending Lenin and Marx statues toppling across eastern Europe – the Berlin icon too became a lightning rod for public anger. Lenin's head lying outside the Zitadelle Spandau museum in west Berlin, where it will be exhibited from 2016. Photo: DPA

The first mayor of reunited Berlin, the conservative Eberhard Diepgen, ordered its removal in late 1991, wanting to rid the city of an icon of a “dictatorship where people were persecuted and murdered”.

The statue was disassembled over months as workers cut through granite, concrete and steel beams inside, splitting Lenin into about 120 parts.

The pieces then were trucked to a secluded forest in Berlin's far southeast and buried in sandy earth.

For long it seemed Lenin's head would remain buried, until historians started campaigning for its excavation.

As recently as a year ago, the Berlin government claimed no-one knew exactly where it was, at which point a Berlin-based US film-maker helped out.

Rick Minnich told local media he knew where it lay, having partially unearthed it in the early 1990s for a “mockumentary”.

Local officials relented and gave the OK for Lenin's “resurrection”.

But the excavation was further delayed when environmentalists identified a colony of endangered sand lizards, which, after a biological field study, was resettled on a nearby pile of rocks.

In its new home, the Spandau Citadel museum west of Berlin, Lenin's head will be a showpiece of the exhibition “Unveiled. Berlin and its Monuments”, set to open in early 2016.