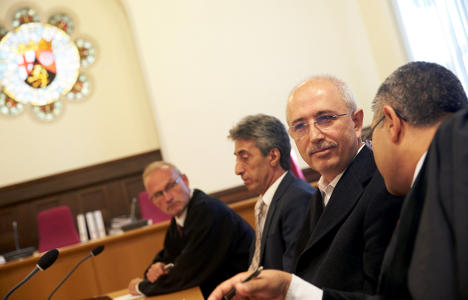 Muhammed Taha Gergerlioglu with his lawyers in court on Wednesday. Photo: DPA

Prosecutors allege that the three men assembled information on critics of the Turkish government from the start of 2013 to the end of 2014.

Ahmet Duran Y. (59) and Göksel G. (34) spied on Kurdish activists and collected information on opposition figures living in Germany and delivered it to their superior Muhammed Taha Gergerlioglu (59), the prosecutors argue.

While Duran Y. Amd Göksel G. were released after their arrest in December 2014, Gergerlioglu has remained in custody throughout this period.

But on the first day of the trial Gergerlioglu's defence team denied the charges.

The defence also called for the suspension of the trial, saying the prosecution had not supplied them with all the evidence against their client, SWR reports.

Why Gergerlioglu has remained in custody would appear to be explained by his key position within the Turkish elite.

Spiegel reports that he was a former adviser to Turkish President Recep Tayyip Erdogan and after his arrest the Turkish Consul General visited him in person.

Furthermore a lawyer called up federal prosecutors to make it clear that Gergerlioglu was an influential member of Erdogan's inner circle.

A key piece of evidence in the trial is a “top secret“ document containing a warning of impending attacks on leading members of the Chechen exile community in Istanbul.

The document was found on Gergerlioglu's smartphone and is being used by prosecutors to build their case that he belonged to the Turkish spy agency, Milli Istihbarat Teskilat (MIT).

A further 34 documents and 112 photos showing pictures of passports belonging to Turks, Kazakhs, Britons, Syrians and Libyans were also found on his phone.

Investigators believe that the passports belong to political opponents of Erdogan.

Prosecutors also produced a taped telephone conversation in which Gergerlioglu talks about the inner working of the Turkish intelligence services.

The Turkish government has denied that the three men worked for its intelligence agency.

While Gergerlioglu himself seems to be an established figure in Ankara, the men he chose to form his cell are less obvious spy material, reports Spiegel.

Göksel G.'s official job was as a joiner, but his company appears to have had solvency problems and his family survived on his wife's income as a carer.

Duran Y. meanwhile ran a travel agency, and after 40 years in Germany could still barely speak the language. He had a previous criminal record for dealing in drugs and counterfeit money.

The information the men gathered appears to have been fairly insubstantial, consisting mainly of overheard conversations at political rallies.