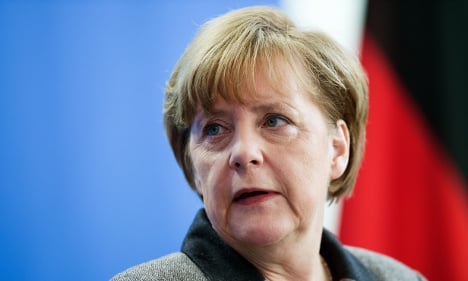 “There is another step that needs to be taken because neither Germany nor Sweden can determine the number of refugees given that it stems from the situation (on the ground),” said Merkel after talks with Swedish Prime Minister Stefan Löfven, adding that “we need an open system to share out those with a right to asylum”.

Löfven told reporters: “We have agreed to continue to push for a reformed European refugee policy. All countries must take full responsibility to help people who have been displaced”.

According to Juncker's proposal for mandatory quotas for EU states which is set to be unveiled Wednesday, Germany and France would take about half of the 120,000 refugees to be relocated from frontline states.

Merkel said the so-called Dublin 3 rule — which requires the first EU port of entry to process asylum claims — “no longer works” as it means that both Italy and Greece are left to take in the bulk of Europe's refugee influx.

“We must discuss a new asylum policy,” she said.

Berlin has already stopped applying the rule for Syrians, and is allowing citizens of the war-torn country to apply for asylum in Germany irregardless of their first port of arrival in the EU.

“I'm seldom so convinced that this task will also determine Europe's future and whether the continent really accepts the value … of individual freedom,” Merkel said.

“On this question, the whole world is watching. And we're not just saying Syria is so far away from us. Rather, we're simply taking care of the problem,” she added.

#Merkel: we won't find a #refugees #asylum solution that works for all EU28 unless we work together in spirit of respect for one another

#Merkel: we think all EU countries fulfil the conditions to take on #refugees. The EUCHR may decide otherwise, for example on Greece

Löfven had said ahead of the talks with Merkel that his country remained united with Germany in pushing for a quota system which would force all EU countries to take in a number of refugees proportional to their size and economic health.

But he also said he was “concerned” that some EU countries are still “shirking their responsibility” to take in refugees.
“Sweden and Germany are the countries in the EU that take in the largest share of refugees and advocate a common system of binding quotas, which all EU countries must follow,” he said on Monday.
While asylum seekers generally enter Europe through Greece and Italy, nearly half of all asylum requests in 2014 were presented in Germany and Sweden. Efforts by the European Commission to make it mandatory for other countries to accept more refugees have so far failed.