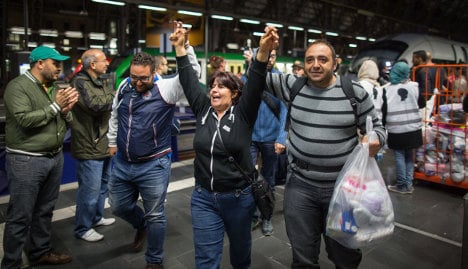 People celebrate as they are welcomed by well-wishers in Frankfurt. Photo: DPA

As crowds of well-wishers turned out at train stations across Germany to greet the new arrivals, the UN's refugee chief said the crisis could be “manageable” if European countries all pulled their weight and agreed on a common approach.

German police said a record 14,000 people had arrived from Austria over the weekend by late afternoon on Sunday, the majority of them fleeing the civil war in Syria, and some 3,000 more were expected during the evening.

The issue is expected to dominate Europe's political agenda on Monday, when German Chancellor Angela Merkel is due to meet Serbian Prime Minister Aleksandar Vucic in Berlin and the EU's Home Affairs Commissioner will hold talks with Austrian officials in Vienna.

Europe's worst refugee crisis since World War II has sparked a flurry of diplomatic wrangling, with Turkey reacting furiously to what it called the closed-doors response of “Christian fortress Europe” as migrants stream across its soil.

But in Munich, Frankfurt and other cities, the welcome for thousands of refugees who had made a perilous trip across land and sea and finally set foot in Germany – seen by many as a promised land – was overwhelming.

As they stepped off trains in Munich, many clutching young children, the newcomers were met by crowds of cheering well-wishers holding balloons, who handed them food, water and toys.

Dismounting from one train, two boys, perhaps seven or eight years old, pushed out their chests like football stars and beamed smiles as they traversed the throng of applauding people.

“The people here treat us so well, they treat us like real human beings, not like in Syria,” said Mohammad, 32, from the devastated town of Qusayr, his eyes welling up with tears.

Austria threw open its borders over the weekend to allow thousands of migrants to travel from Hungary to Western Europe after chaos erupted at Budapest's main train station where thousands had been stranded in temporary camps.

Most of the migrants are hoping to reach Germany, Europe's biggest economy, which is expecting a record 800,000 new asylum seekers this year, four times the number in 2014.

But Chancellor Werner Faymann on Sunday said the “temporary” relaxation of border rules would have to end, and that “a measure of this type cannot be a solution” to the migrant crisis.

EU interior ministers are meeting on September 14, and Austria is among those pushing for a summit to be held swiftly afterwards.

The 28-nation EU has struggled to build a coordinated response to deal with the flood of people at its borders, and on Sunday UN refugee chief Antonio Guterres criticised the huge disparity in members' responses.

“The European asylum system is deeply dysfunctional, it works badly. Some countries make the necessary effort, and the effort of many others is nearly non-existent,” he told French broadcasters.

But he sad the situation could be tackled “if everyone agrees on a joint action plan,” calling for unity days before European Commission President Jean-Claude Juncker is set to unveil a plan to relocate 120,000 refugees from Italy, Greece and Hungary.

Germany's Welt am Sonntag newspaper said the EU plan, expected to be released on Wednesday, would see Germany accepting 31,000, followed by France with 24,000 and Spain with almost 15,000.

The human cost of Europe's refugee crisis, which has seen more than 350,000 people attempt the perilous crossing from North Africa this year, was brought into sharp focus by pictures of a Syrian toddler found dead on a Turkish beach last week.

In a passionate speech Sunday to members of his Christian Democratic party in Milan, Italian Prime Minister Matteo Renzi pointed to a picture of the drowned Syrian child, and said there were “thousands like him”.

“We need rules, we cannot take in everyone,” said Renzi. “But nothing will ever stop us trying to save a life whenever possible. This is our challenge.”

But Turkish Prime Minister Ahmed Davutoglu, whose country has become a key transit route for refugees fleeing war in neighbouring Syria, on Sunday lashed out at the “ridiculously small” share of refugees EU countries were accepting.

Writing in Germany's Frankfurter Allgemeine Zeitung, he hit out at “Christian fortress Europe” pointing out that Turkey had already taken in more than two million people from war-torn Syria and Iraq.

His remarks came just days after Hungary, which is building a wall to keep out migrants after some 50,000 new arrivals in August alone, raised the alarm over the impact of mainly Muslim refugees on Europe's “Christian culture”.

But Pope Francis urged a different approach in his Sunday sermon, urging “every parish, every religious community, every monastery, every sanctuary in Europe” to take in a family.

“Faced with the tragedy of tens of thousands of asylum-seekers fleeing death (as) victims of war and hunger who are hoping to start a new life, the gospel calls on us to be the neighbour of the smallest and the most abandoned.”

The Vatican's two parishes would take in two refugee families “in the coming days”, he said, setting an example for more than 50,000 other parishes across the continent.