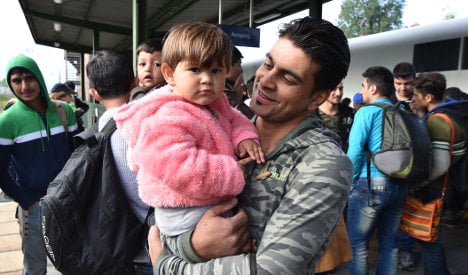 A father and child from Syria arrive by train in Brandenburg on Monday. Photo: DPA.

Germany’s federal government said on Sunday it hopes to spend a total of €6 billion next year as thousands more arrived in Germany at the weekend.

The government said it would increase federal funds targeted at refugees by €3 billion next year, and that it will deliver an additional €3 billion to state and local governments.

Chancellor Angela Merkel and Vice Chancellor Sigmar Gabriel presented the plan at a press conference on Monday, emphasizing Germany and Europe's duty to help those fleeing war and “horrible conditions” in their homelands.

“What we are experiencing now will change the country in the coming years,” Merkel said. “We want that change to be positive and we believe we can make that happen.”

Merkel also said she was happy to see the positive reaction from local authorities and citizens to the wave of refugees arriving over the weekend, totaling nearly 20,000.

“I want to thank all of the communities, workers and citizens who welcomed people and showed a good example. I am proud of our country.”

Germany had allocated €1 billion for refugees assistance this year.

Politicians also said on Sunday they wanted to implement stricter regulations when it comes to benefits and rejecting asylum applicants. The plan called for replacing cash allowances given to people at asylum registration centres to be replaced as much as possible with other benefits.

Additionally, Kosovo, Albania or Montenegro would be classified as “safe countries of origin” and people who come to Germany from there will be sent back more quickly.

But the plan also stated that those who come from safe countries should be given opportunities to enter the country legally to work if they have proper documentation.

“Those who can show a work or training contract that meet union-agreed pay and conditions should be allowed to do so,” the plan stated.

The plans will be discussed at a meeting between central and state governments on September 24th and will be voted on by the Bundestag (German parliament) and the Bundesrat (upper house of parliament).

“Central, state and local governments… must create through a united, national action in a short period of time the conditions for the reception of an unprecedented number of people in need of protection, as well as for the return of those who must go home,” the central government said in a statement on Sunday.

The central government also wants to increase the budget for the Foreign Ministry by €400 million to go towards crisis management and prevention.

And ministers want to add 3,000 more federal police over the next three years and recruit 10,000 more people to the Federal Volunteer Service.

Germany and France would take nearly half of the 120,000 refugees to be relocated from frontline states under a plan by European Commission chief Jean-Claude Juncker, a European source said Monday.

According to Juncker's proposal for mandatory quotas for EU states which is set to be unveiled Wednesday, Germany would take 31,443 and France 24,031, to relieve the burden on Greece, Italy and Hungary, the source told AFP.

French President Francois Hollande confirmed in a press conference on Monday that France would take 24,000 refugees over two years.

While both Gabriel and Merkel praised positive efforts of citizens to offer support to incoming refugees, Germany has also struggled to combat continued xenophobic attacks against refugees and their homes.

A fire in Rottenburg, Baden-Württemberg left five injured at an asylum-seeker home in the early hours of Monday, with some jumping out of windows to escape the flames. Police are still determining how the fire started.

Two other fires were sparked in Dortmund at a planned refugee home and in Ebeleben, Thuringia at a planned asylum home.

Head of the German Intelligence Service (BND) Gerhard Schindler sought to assuage any concerns about who exactly is entering the country on Sunday, telling Bild tabloid that there is “no concrete evidence” of terrorists coming into Germany as refugees.

“We have at this time no concrete evidence that any of the refugees coming from the Middle East or Africa are terrorists,” Schindler said.

He added that it was much easier for terrorists to use “forged or stolen documents and a plane ticket” to enter than risk the treacherous journey across the Mediterranean.