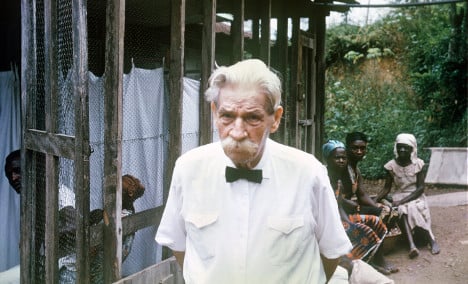 Schweitzer spent most of his later years at Lambaréné. Photo: DPA

“Grow into your ideals, so that life can never rob you of them.”

One example of a man who did everything he could to grow into his ideals – and encapsulate them in a legacy which continues to save lives and inspire minds today.

From music to medicine

Albert Schweitzer was born in 1875 in Alsace-Lorraine, then part of the German Empire.

Son of a Lutheran pastor, he was born into a world of music, religion and academia – and for the first 30 years of his life, he stuck to family tradition.

Following in the footsteps of both grandfathers, he began playing the piano and organ at a young age, and when he was nine he performed in his father's church for the first time.

As well as music, young Schweitzer was passionate about religion and academia – and in 1893, he began studying theology at the University of Strasbourg.

Six years later he emerged with a doctorate in philosophy, having written his dissertation on the religious philosophy of Kant. The same year, he began preaching at St Nicholas Church in Strasbourg.

By 1905, he was already a celebrated concert organist, preacher and theologian.

But Schweitzer's course in life was about to change – because it was in this year that he began studying medicine at the University of Strasbourg.

Schweitzer had a definite goal in mind when he embarked on his medicine studies.

He wanted to travel to Africa. But not as a pastor: he wanted to go as a medical missionary.

Seven years later, with an M.D under his belt, Schweitzer founded a hospital in Lambaréné, in French Equatorial Africa. The institution offered general medical and healthcare support to residents of the town.

But the First World War broke out soon afterwards – and in 1917, he and his wife Helene were sent to a French internment camp as prisoners of war.

When the war ended in 1918, the pair were released. Schweitzer then spent the next few years in Europe, preaching, taking medical courses – and writing.

Writing was a passion throughout Schweitzer's life. Earlier, while studying medicine, he'd penned a biography of Bach, a book on organ playing and building, and – most famously – his work: The Quest of the Historical Jesus.

Now, Schweitzer put pen to paper once again – and by the time he returned to Lambaréné in 1924, he'd produced On the Edge of the Primeval Forest, The Decay and Restoration of Civilization, Civilization and Ethics, and Christianity and the Religions of the World.

Helene was not well enough to travel, and stayed in Europe with the couple's daughter Rhena. The couple stayed in close contact, and Helene travelled back out to Africa in 1941 to assist her husband during the difficult war years.

But the tropical climate was too much for her. Her health had already been weakened by overworking, previous travels and her long internment during the First World War. Helene died in Zurich in 1957, after flying back to Europe for medical reasons.

Her ashes were buried in Lambaréné.

From 1924 Lambaréné was Schweitzer's home.

The money he earned from book royalties and public appearances was poured into the young hospital – and by the early 1960s, it could treat over 500 patients in residence at any one time.

At the hospital itself, he contributed as doctor and surgeon, and was also superintendent of the buildings and grounds.

A full-time occupation in itself, perhaps. But Schweitzer was also pastor to the local congregation, and village administrator. He wrote, he carried on playing music, and played host to numerous visitors to Lambaréné.

In 1952 he was awarded the Nobel Prize for Peace – and his $33,000 prize money went straight back into Lambaréné, to develop a leprosarium.

By 1965, Albert Schweizer had earned widespread fame and respect.

On August 28th 1965, he fell ill from exhaustion. His condition worsened over the coming days, and at 11:30pm on September 4th, he passed away.

His death was kept a secret throughout the night, to allow daughter Rhena to send telegrams to relatives.

Schweitzer was buried on September 5th on the bank of the Ogooue River, next to the ashes of late wife Helen.

Fifty years on, his hospital's Medical Research Unit is one of Africa's leading scientific institutions battling the spread of malaria.

It is the primary healthcare provider for the town of Lambaréné and the surrounding region in eastern Gabon, and each year receives over 35,000 outpatient visits. Surgeons carry out over 2,000 operations every year, and the hospital has the lowest mortality rate on the continent for treating children with severe malaria.

“With a little reason and much heart, one can change many things, or move mountains,” Schweizer reportedly once said.

Add to this his remarkable talent, work ethic, love for others and devotion to his cause, and it's perhaps little wonder that Schweitzer's Lambaréné legacy flourished into the success it is today.