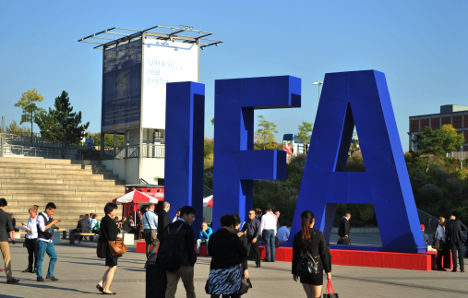 The annual IFA show, which began as an exhibition on the new medium of radio 90 years ago, has developed into a massive showcase for consumers to touch and feel the latest in technological innovations.

Over six days from Friday, tech giants will be trotting out novelties as diverse as chips implanted in humans to virtual reality headsets, drones and the latest 3-D printers.

But it is “wearable” technology, whether smartwatches or fitness gadgets, that is expected to dominate this year's show, analysts say.

South Korean electronics giant Samsung will show off its latest smartwatch, the Gear S2, on Thursday.

Chinese technology giant Huawei is also expected to launch its first smartwatch, as it joins other Android users in going head-to-head with Apple, which traditionally does not exhibit at IFA.

“There will be a lot of announcements from wearables. We'll see a new cycle of smartwatches, new smartwatches coming into the market which could be potentially interesting,” Ronan DeRenesse, analyst from Ovum, told AFP.

“There'll be some developments in terms of power consumption, the accuracy of the data that's gathered on the smartwatches, the form factors – going towards the round shape, or copying a bit more of Apple Watch, less techie to something a bit more fashionable,” he added.

But the smartwatch launches will not be limited to smartphone makers: watchmakers too will be seeking to safeguard their place on the consumer's wrist.

Among them is Fossil, which had previewed a smartwatch built in partnership with chip giant Intel at a developer's conference in San Francisco and which could well pick IFA to launch the product.

Analysts at Gartner are expecting up to 40 million smartwatches to be sold this year, a massive jump from an estimated 5-6 million last year.

But they still make up only a fraction of the total product sales from the show.

Last year, $5.3 billion worth of orders were placed at IFA — the last major fair of the calendar year and therefore traditionally where many stores place their orders for Christmas.

More than 1,500 exhibitors this year will be seeking to top the 2014 orders level with their gadgets on show over a floor space of 149,500 square metres, equivalent to 20 football pitches.

Unlike previous years, smartphone launches will not be a big part of the show, given that most major brands including Samsung have showcased their new products on other occasions.

DeRenesse noted that among innovations that would be interesting to look out for would be those in automobile, given Germany's strength in the industry.

Analysts are also looking keenly for any developments into another potential growth area — the interconnected home, where appliances can be switched on and off from a distance, or where gadgets themselves can talk to each other.

Zimmerman believes that mission control for such a smarthome may be no other than the tiny smartwatch on one's wrist.

But Karpersky Lab has another more radical vision — with a live implantation of a chip in a human.

Experts from the anti-virus software maker are also due to discuss how “if all things are now connected, the only missing link is the connection to us humans”.