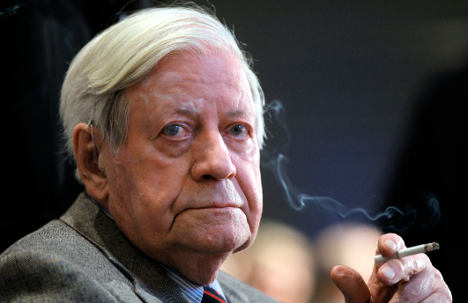 According to reports from those close to the 96-year-old ex-Chancellor, his condition is serious, reports the Hamburger Abendblatt.

“Helmut is strong and stubborn, but nonetheless the situation is serious,” a friend told the paper. “While it is not seriously life threatening, it really doesn't look good.”

Schmidt's doctor, Prof. Heiner Greten, was called to the former Chancellor's home on Tuesday and immediately ordered that Schmidt be brought to hospital.

“The situation is very serious,” the doctor told Bild. “The blockage in his vein is considerable and could not be opened up until now with a catheter.”

On Wednesday it is expected to become clear whether Schmidt needs an operation, but he appears at least to be in good hands. The Asklepios Hospital in Hamburg, where he was brought, specializes in vascular operations.

The hospital has said that any operation would be “complicated and difficult”, reports Focus.

But not treating the problem could also be life threatening as a blocked artery can lead to vital organs not receiving enough blood.

Schmidt was only last month in hospital for a couple of days when a lack of liquid intake appeared to have resulted in health problems.

Born in Hamburg, Schmidt was the leader of the Social Democratic Party (SPD) and Chancellor of Germany between 1974 and 1982.