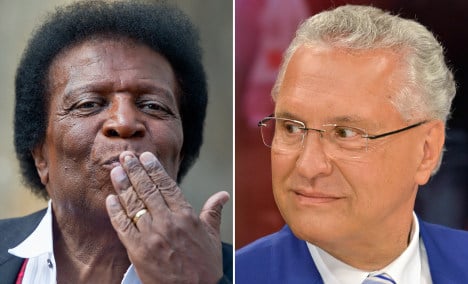 As panelists talked refugees on Monday night's episode of “Hart aber Fair” (“Tough but Fair”), Bavaria's interior minister Joachim Herrmann made what appeared to be a monumental gaffe.

“Roberto Blanco has always been a wonderful negro, who most Germans have delighted in,” Herrmann said, using the word “Neger” – the German language's closest equivalent to “n*gger”.

He added that many black footballers play for Bayern-Munich FC – a fact that pleases fans.

Host Frank Plasberg wasn't sure how to react – and merely uttered a surprised-sounding “Holla.”

However, numerous viewers took immediate offence at Herrmann's use of the word “Neger”, viewed as discriminatory and racist by many in Germany. The topic was the number one trending theme on Twitter throughout Tuesday morning, fast becoming what the German media refer to with the Denglish word 'shitstorm.'

“A “negro” is only wonderful if he entertains white people by singing, dancing or playing football? Racism overload”

“Can somebody tell me why people like Joachim Herrmann are allowed to represent Germany?”

Blanco himself, though, has shown no sign of being offended by Herrmann's remarks.
“I can't imagine that he meant anything nasty,” he told Focus Online – adding, however, that it would have been more sensible for Herrmann to use the term “coloured person” rather than negro.

Herrmann took to the airwaves on Tuesday morning to try and mend the damage.

“I usually don't use the word negro at all,” he told ARD- and ZDF-Morgenmagazin.

But the episode showed clips of a Bavarian demonstrator shouting: “I don't want any negros here,” he explained.

“So when Mr Platzburg asked me, “What do you say to that? Is this the right attitude?” I answered that people with this attitude should take note of Roberto Blanco, for example, who is a wonderful negro.”

He views the citizen's claim as completely unacceptable, he said – and he wanted to “make this clear, using a positive example.”

“Anyone who treated the programme reasonably would have been able to sense that right away.”

A little bit of fun

Blanco is one of Germany's most best-loved popular entertainers. Born in Tunisia, he grew up in Beirut and Madrid before moving to Germany in the early '50s.

He soon found success in film and movies and by the early '70s he had his own television show “Heute so, Morgen so”.

In 1972 he released his most famous song “Ein bisschen spaß muss sein” (you need to have a little fun).

Although Blanco's star was on the wane in the '90s and 2000s, he was introduced to a younger audience through a collaboration with party singers Finger & Kadel in 2013 and a advert for a car hire company, both reworkings of his most famous hit.