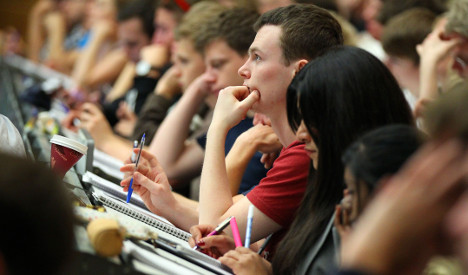 Students in a lecture theatre at Cologne University. Photo: DPA

As you might imagine, when I moved to Germany to study for a double master’s programme in the University of Cologne (UoC), I was excited.

After a year, I love the city: the open atmosphere, the Karneval, the beautiful riverside, the salad buffet at the student cafeteria, biking anywhere in ten minutes, grilling in the park on a warm day, buying beer at a kiosk after midnight, the people.

Being a student, however, the largest part of my time here goes into studies. And in Cologne, those suck balls.

Here are the main things that got me down during my time on the Rhine: Is this the best way to learn in the 21st Century? Photo: DPA

UoC was founded in 1388, and its teaching style stems from medieval times. There are lectures – i.e. listening to a monologue – and exercise sessions, which involve noting everything down from a monologue.

That second one means you are copying your lecturer's handwritten notes, and then a few months later trying to decipher your hieroglyphs.

Upload solutions to exercises online! That would save time to discuss the exercises and see if the students had trouble with them. As they are, the sessions have no value beyond providing you with the right solutions.

“All our information can be looked up online. Videos, PowerPoint slides and texts… many have already noticed that we have installed cameras in all the lecture halls. Soon all lectures will be put online lightning-fast.”

In my ten courses here, worth six credits each, grading was based almost solely on exams. No cases, no presentations, no essays, no assignments, no learning diaries, no learning groups, no pondering, no critique, no independent thinking or feedback whatsoever.

The system rewards learning by heart over the frantic few days before the exam – only to forget everything the week after. Compare that to any worthwhile university, and you’re not sure whether to laugh or cry.

As leading science educator Lawrence Krauss put it: Testing inevitably means you teach students to pass tests. That might have nothing to do with the problems students face ten years later when applying their skills in real life.

So teach us! Force students to study during the semester with homework. Promote understanding by assigning big-picture essays. Make us learn the methods by giving us assignments to try applying the theories in a case study.

That way we’ll learn, and hopefully won’t forget everything the moment we start studying for the next exam. Yale, MIT, UCLA, or even more moderately funded universities like Aalto and Fudan are good examples.

The main entrance to the University of Cologne. Photo: DPA

Forgot to stretch your fingers before the exam? Uh-oh. In Cologne, taking exams is a race against time.

In finance, you have 60 minutes and up to 20 questions. The aim is not to test understanding, but your ability to knock out a ridiculous number of easy questions fast. In one exam, I had to answer the same question five times (with different numbers), as if the second time around would test my abilities in any useful way.

This is ridiculous – especially in an age where every fact can be checked in seconds, while concepts get more and more complicated.

Test whether we understand the material and give us a proper challenge! Just don’t make it artificially difficult by limiting the time to 60 minutes.

I'd prefer exams that last hours and really push my cognitive abilities to the limit – way more rewarding than a sprint.

Keep yourself warm on long evenings at the cafeteria by complaining heatedly about the bureaucracy. Photo: DPA

At UoC, everybody has a student card. It’s a piece of paper you’re probably going to rip sometime during its six-month validity (and don’t laminate it, you’ll need the hologram). It has no picture on it, so you need a normal ID to go with it.

Then there’s the card you use to pay at the student cafeteria, and one for library, and another one for printing at said library.

And to sit exams you’ll need an exam ID, separate from your student card.

Have one student card that works everywhere. You could even connect it to your credit card, smart phone, or, the hell with it, your fingerprint!

To be fair, though, UoC is fixing this issue next semester. The students here are getting the one-card-does-all solution.

“As Juuso Nisula mentioned, it's true that we are abolishing the paper student ID. Next year we'll have the UCCard. It's all digital and the precursor to a complex campus management system to organize all your studies.”

The Prüfungsamt is the office that manages exams.

They’ll schedule all your exams in one week after Karneval, or even all on one day in the month-long exam period.

They’re the people that look you in the face and say “not my problem” when you’re looking for advice.

They’re the people who demand you do everything by the exact date and time they impose, and then miss all their own deadlines.

They reject email, which perfectly embodies their attitude towards students. If we were in China, I’d suppose the Party wanted to keep some unemployed people busy and decided to add an extra unit into the organizational structure.

Everything I said about saving money and nerves above applies. Just get rid of the whole Prüfungsamt. That’s how they roll elsewhere, and it works better.

If nothing else, at least make them use email. UoC has no 24/7 facilities, very little space for group work and practically no computers – which reflects both outdated teaching methods and a disregard for students’ interests.

The only space open on Sundays is the library, which is too small to serve the whole university. Power plugs are a rare commodity and snacks aren't allowed.

And when lectures end in July and people start their frantic studying for the exams, instead of providing additional work spaces, the university actually REDUCES the number of available facilities.

Remember the new student card I mentioned? How about using that as a key card for 24/7 access into some of the facilities? That’s the way it works elsewhere – with no additional costs.

Communication? There is none. Two weeks before the next semester starts, you don’t even know your grades from the previous one, nor which courses will be offered in the next – I got the last exam results from mid-February in May!

Students are literally trying to interpret exam result charts from last year in a desperate attempt to find out in which month they might have exams this year.

Two key courses are suddenly removed from the semester when the professor gets pregnant. My study programme is officially in English, but suddenly one of the mandatory courses is offered only in German. I’m lucky enough to know the language, but God have mercy upon those who don't.

The first thing you have to do to improve communication is to get your head out of your arse and stop forgetting communication tools exist.

“We communicate, but in such a big institution it takes a while… honestly, the other universities Juuso mentions are either privately financed or have access to multiple times the resources that we have here in Germany. We are one of the only countries where you can study WITHOUT fees.

“If you visit our new website, you'll see that we have an international portal, completely in German and English with advice for getting through your studies, links to our advisers and tips for life in Cologne.”

There has to be a fundamental change in the way University of Cologne, or specifically, the Faculty of Finance functions as a system.

I’ll use my other home university, Aalto in Helsinki, as an example.

To exaggerate a bit, there are good things and bad things about the university: the bad things tend to be the ones given from above, the good ones have usually been born somewhere in the organization, then tested and – if it turns out to be smart – implemented.

This generates grassroots movements that spot problems and then aim to fix them.

Germany as a whole should take serious steps towards a bottom-up approach.

Maybe then, one day, University of Cologne will be the engine of enlightenment I hoped it would be.

Or if not, at least now you’ve been given a fair warning: don't study in Germany, it's a pain in the ass.

Does Juuso's experience chime with how you found studying in Germany? Were UoC's responses satisfactory? Let us know in the comments!