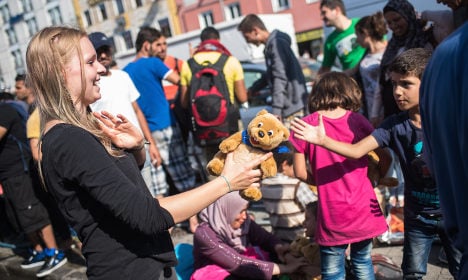 Police tweeted on Tuesday afternoon that they were “overwhelmed” by the amount donated at the city's main train station, where many refugees arrived exhausted or in need of medical attention after days or weeks of travelling.

“We are overwhelmed by the many donations Munich people have made for the refugees at the main station. Please don't bring any more things”

Officers had been on the scene since the early morning as successive waves of people arrived by train from Hungary via Austria.

They kept the crowds under control as the refugees were divided up to be sent to emergency accommodation in and around the city.

Bavaria's social affairs minister Emilia Müller asked for other federal states to lend support to the Free State, saying that “Bavaria can no longer do this alone” on Tuesday.

DPA reported that the total number of people to arrive in the Bavarian capital on Tuesday was around 1,500, with more than 1,000 still in Austria and up to 2,000 waiting at Budapest's Keleti railway station.

Up to 2,000 refugees had arrived in Munich by train overnight after Hungarian authorities allowed them to leave Budapest and travel to Germany via Austria.

Hungarian authorities on Monday ended a police blockade that stopped people without an EU visa from boarding trains heading towards Austria and Germany from Budapest.

The move appeared to be a fit of pique by Hungarian authorities after Germany last week effectively suspended for Syrians an EU rule calling for refugees to be processed in the first EU country they enter.

The new spate of arrivals on Tuesday morning is mostly made up of people who had spent the night at the station in Salzburg in Austria waiting for the next scheduled departure for the Bavarian capital.

Hundreds of people were lying in the station exhausted from the journey, the Münchener Merkur reported, with police and firefighters on the scene to provide food, water and medical aid even as more kept coming.

Munich police had said that anyone wanting to help with gifts of food,water, baby food, nappies or other supplies was welcome and should drop them at the station's north entrance, the Münchener Merkur reported.

“Help from ordinary people isn't letting up! Fantastic!”, the police tweeted later in the morning.

By Tuesday, the Hungarian police were once again preventing refugees from boarding trains in Budapest while crowds chanted for Germany, Merkel and the United Nations outside.

Only three people applied for asylum in Salzburg instead of traveling on to Germany, Austrian authorities said.

More than 200 people were also stopped on their way to Germany in trains passing through the Czech Republic, police there said, including 61 children.

They were put up in gym halls in the towns of Breclav and Hodonin.

Hundreds of people arrived in Munich on trains every two hours throughout Monday evening and the early hours of Tuesday.

A spokesman for the Munich main station said that the atmosphere was somewhere between “calm” and “euphoric”, with many of the refugees calling “Thank you, Germany”, or “We love you, Germany,” as they arrived.

Local people came into the station to donate food and water to the new arrivals as they stepped onto the platforms.

Bavarian police estimated that between 500 and 600 refugees arrived in Munich overnight.

Some of them were registered immediately, while others were taken to shelters.

Charity Migration Aid estimated that up to 2,000 people had been stuck in the Hungarian capital, prevented from leaving for want of a visa to travel freely around the European Union's Schengen passport-free zone.

The majority of them were refugees from Syria, northern Iraq and dictatorships such as Eritrea.

While some of them travelled straight to Munich after police at the Hungarian capital's main station abandoned their barricades, others were stopped in Austria, where authorities planned to deport them back to Hungary.

Under the existing 'Dublin rules', the EU member state where refugees are first registered by the authorities is responsible for their care and for processing their asylum applications.

But it appears that the Hungarian authorities decided to allow people to board trains after hearing last week that Germany had suspended the rules in the case of Syrian refugees.

Chancellor Angela Merkel denied in her annual summer press conference on Monday that the government had relaxed rules for people arriving from Syria.

But the Interior Ministry and Federal Office of Migration and Refugees (BAMF) confirmed last week that they were no longer removing Syrians to the EU countries where they had first registered, but processing their asylum applications in Germany.

Budapest has criticized Germany's decision to ease asylum restrictions, warning that it “built up the hopes of illegal immigrants”.

The Hungarian government on Monday demanded that Berlin clarify “the legal situation, in order to eliminate this ambiguity and controversy”.

“It is in our common interest that all member states abide by EU legislation. Order and legality must be restored at the borders of the European Union”, said government spokesman Zoltan Kovacs.

Hungary has become a frontline country for migrants arriving via the western Balkans route as they flee war, unrest and poverty in the Middle East, Africa and Asia.

Many are trying to reach Germany, where the government last week eased asylum rules for Syrians to relieve pressure on southern European nations.

“I want to go to Hamburg. My brother arrived there 12 days (ago),” a 34-year-old Syrian told AFP at Vienna's central station, where he and his family had arrived from Budapest on Monday.

Mohammed, who fled the war-torn city of Aleppo with his wife and children a fortnight ago, said they had been stopped at the Austrian border for 25 minutes before being told to move on.

He added that his family had been forced to spend four days sleeping on the streets in Hungary.