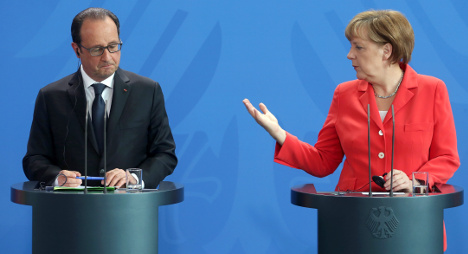 “There is a kind of intimidation,” Stiglitz, an outspoken opponent of austerity policy, said of the influence of Germany over the economic policy pursued by President Francois Hollande.

Stiglitz also said he agreed with former Greek finance minister Yanis Varoufakis that Germany's intransigence against Athens was aimed at striking fear in Paris and convincing the French government to continue austerity policies.

“The centre-left government in France has not been able to stand up against Germany” on its budget policy, eurozone policy, or on the response to the Greek crisis, said the former World Bank chief economist and advisor to US president Bill Clinton.

Regarding the European Union, he criticised Brussels for focusing on nominal deficits of member states rather than those adjusted for the economic cycle, as well as the policy response.

“Cutting taxes and expenditures contracts the economy, just the opposite to what you need,” said Stiglitz.

“I do not understand why Europe is now trying that after all the evidence, all the theory says it does not work,” he added.

He said the “totally discredited” policy now only has support in Germany and a few people in France.

Stiglitz, who is in France to promote the translation of his latest book, “The Great Divide”, said the “centre-left has lost confidence in its progressive agenda”.

Stiglitz said Schröder can be viewed as a success from the point of view of accomplishing a so-called internal devaluation when competitiveness is increased by reducing wage costs, but that “you make ordinary workers suffer”.

He said before the global economic crisis France had been one of the nations that had most embraced equality, but that austerity policies have put that at risk.

“The policies of austerity are at the heart of the increase in inequality,” said Stiglitz.