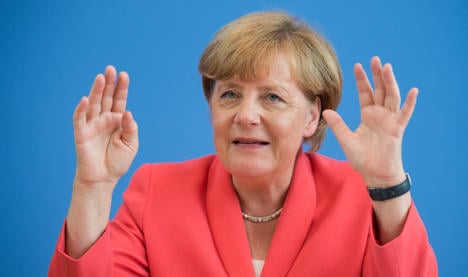 “Universal civil rights have been closely linked with Europe and its history as a founding impetus of the European Union,” she said.

“If Europe fails on the question of refugees, if this close link with universal civil rights is broken, then it won't be the Europe we wished for,” she said, urging other EU members to accept their fair share of asylum seekers.

Speaking to foreign journalists in Berlin, Merkel said: “Europe as a whole needs to move. Member states must share responsibility for asylum-seeking refugees.”

Germany, the union's most populous country and biggest economy, expects to receive 800,000 asylum seekers this year, four times more than in 2014 and more than any other EU country.

“If we don't arrive at a fair distribution then the issue of Schengen will arise — we do not want that,” she said, referring to the visa-free zone covering much of the EU and several neighbouring countries.

Merkel expressed confidence that Europe would rise to the challenge, pointing to previous issues it had mastered, such as the 2008 banking crisis, and to problems Germany itself has overcome, from the 1990 reunification to its ongoing nuclear phase-out.

Germany was economically and politically strong enough to overcome the challenge, she insisted, saying: “We can do this”.

Italy especially must be offered help from other EU nations as it had taken in huge numbers of migrants arriving via the Mediterranean Sea, the chancellor said.

She implicitly criticised countries including Slovakia that have rejected migrants from Islamic countries, saying: “if we start saying 'I do not want Muslims' … that cannot be good”.

On the spate of hate crimes and attacks against refugee shelters in Germany, she vowed that the “full force of law” would be brought down on those who insult, attack or launch arson attacks targeting the newcomers.

“There will be zero tolerance for those who put in question the dignity of other people,” she said.

Merkel urged citizens to stay away from far-right and xenophobic rallies, saying: “don't follow their leaders” or those who have “prejudice, coldness, even hate in their hearts”.

She thanked the many volunteers who have helped welcome refugees, saying that today in much of the world “Germany is seen as a country of hope and opportunity”.