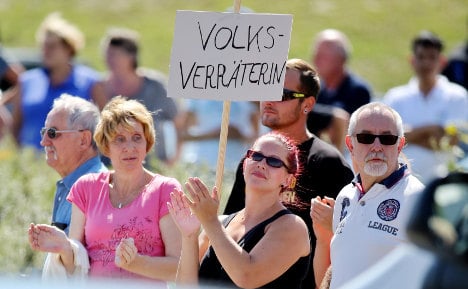 Anti-refugee demonstrators carry a sign accusing Chancellor Angela Merkel of being a "traitor to the nation" this week in Heidenau. Photo: DPA

The town of Heidenau near Dresden, where violent anti-refugee protests erupted last weekend, has become the focus of Germany's struggle to absorb a vast wave of asylum seekers that is seen hitting a record 800,000 this year.

In a bid to prevent further violence, regional authorities in the eastern state of Saxony had outlawed all outdoor public gatherings in Heidenau from Friday afternoon until Monday morning, on grounds they could not ensure public safety.

But an administrative court in Dresden later ruled ban was “clearly illegal” saying police forces from around the country could be made available.

“In addition, the police have the resources, including water cannon, to prevent any disproportionate damage,” the court said.

But on Friday evening, Saxony's administrative court of appeal restored the prohibition, banning all gatherings over the weekend, including those in support of the refugees.

The ruling came as the interior ministry confirmed it would send federal police reinforcements to Saxony to boost security.

“Saxony sought the help of federal police and this support will be provided,” interior ministry spokesman Johannes Dimroth said, without saying how many officers would be deployed.

Chancellor Angela Merkel herself pledged to do “everything possible to provide support to the Saxony police” at a news conference with Danish Prime Minister Lars Rasmussen.

Merkel has condemned the anti-migrant protests as “vile” and travelled to Heidenau on Wednesday in a show of support for refugees and volunteers at the shelter.

But as she arrived at the centre, some 200 people jeered and booed her, shouting far-right slogans, including “Traitor, traitor!” and “We are the mob”.

As the courts were wrangling over the issue, dozens of pro-refugee activists travelled to Heidenau, which has a population of 16,000, to show their support by holding a 'welcome party' for the newcomers.

“Refugees are welcome here!” they shouted, many of them wearing t-shirts bearing the slogan “No one is illegal”.


They also handed out clothes and other supplies to the 250 refugees staying at the shelter.

The initial decision to ban public gatherings had been sharply criticised by politicians and Germany's police union GdP, whose deputy chief Joerg Radek described it as “kneeling before the mob in Heidenau”.

It is “a slap in the face” for all who “stand against the stupid cheap propaganda of the far right,” said Radek.

The sudden surge in people seeking refugee in Europe's biggest economy has exposed a wave of anti-migrant sentiment, particularly in the eastern part of the country which lags behind the west in terms of jobs and opportunities some 25 years after reunification.

A spate of arson attacks have targeted refugee shelters in recent weeks.

On Friday, local police reported an apparent arson attempt against an asylum-seekers' shelter in the northwest where a molotov cocktail was thrown into a former school building now serving as a refugee home.


A woman and her three children living at the shelter in Salzhemmendorf were not hurt as fire fighters were able to put out the flames quickly, police said.