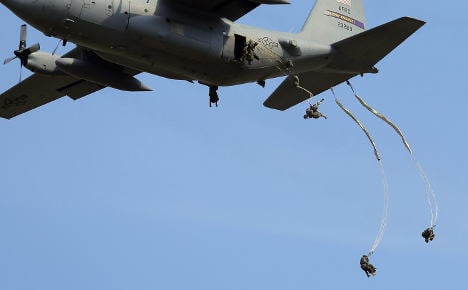 Amid a drive by NATO to boost its defences in light of the Ukraine crisis, 11 member countries are taking part in Exercise Swift Response at the US training area of Hohenfels in southern Germany. It will run until September 13th.

“The paratroopers are now conducting follow-on operations in Hohenfels that focus on crisis response and building a cohesive NATO team of European high readiness forces,” US Army spokesman Christian Marquardt said in an email to AFP.

Airborne drills were taking place in Italy, Bulgaria and Romania as well with a total of more than 4,800 soldiers from Britain, Bulgaria, France, Germany, Greece, Italy, the Netherlands, Poland, Portugal, Spain, and the United States.

Russia's annexation of Crimea in March 2014 and fighting in eastern Ukraine which has claimed 6,800 lives have sparked the worst East-West tensions since the Cold War.

After a meeting in Brussels, the members of the 28-nation, US-led alliance expressed “their serious concern about the recent sharp escalation of violence”.