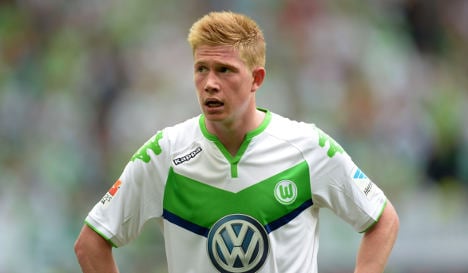 Kevin De Bruyne has moved to Manchester City from VfL Wolfsburg for an estimated €80 million, once again demonstrating the financial muscle of the English Premier League, reports the Süddeutsche Zeitung.

The 24-year-old De Bruyme was widely recognized as the star of Wolfsburg's young team last season, which surprised many pundits by finishing second to Bayern Munich last season. Some had even been tipping them for the title this year.

The young attacking midfielder set up 21 goals for teammates last season and is seen as a highly technically gifted player.

But some German commentators have expressed concern about the benefit of the move for his career, pointing out that an earlier spell at Chelsea ended in failure.

Focus magazine's Marcus Plein wrote that the shy De Bruyne could struggle to assert himself in a team full of highly paid superstars such as those at Manchester City.

This is not the first time that an English club has swooped in and paid big money for a top Bundesliga talent this summer.

In June, Liverpool FC paid €41 million for Hoffenheim's Brazilian forward Firminio, a transfer that unleashed a wave of soul searching among German commentators as to how Bundesliga clubs could compete with the huge money being thrown around by English clubs.

This latest transfer – and particularly the money involved – has again made eyeballs water. Plein called it a “fatal signal for the Bundesliga” and speculated that Wolfsburg may have found it impossible to refuse the money and ended up pushing De Bruyne towards the exit gate.