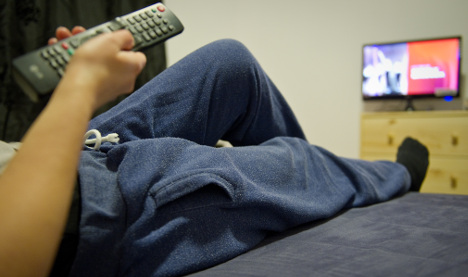 The study carried out by British American Tobacco seems to show that – despite recent protestations that they're the industrious Europeans – modern Germans are among of the biggest layabouts in human history.

Only three percent of the 2,000 people surveyed said that they don't regularly sit in front of the telly, making it by far Germany's most popular past time.

On the other hand more virtuous, traditional German pastimes like camping, joining a club – or even having cake and coffee – seem to be dying a death.

When the BAT Institute for Questions of the Future started looking at what Germans get up to in their free time back in 1981, only 67 percent said they watched television on a regular basis, with people much more likely to spend their time reading the paper, doing some manual work or gardening. Tatort cop drama: The hidden clue as to why Germans watch so much TV? Photo: DPA

But that number shot up with the advent of private channels, a fact baffling to anyone who has seen TV listings, where light relief from hours of cop dramas is normally a documentary about the Nazis.

If TV is ever to be knocked off its perch,  the next top dog is likely to be the internet which has surged in popularity in recent years.

There is a large age difference with internet usage, suggesting that its prevalence will only increase over the coming years.

Traditional activities on the wane How could you resist? Apparently more and more Germans do. Photo: DPA

There was also bad news for those who have an attachment to the German pastimes of old, with being active in a Verein (club) or sitting down for Kaffee und Kuchen (coffee and cake) both losing popularity.

While the majority of Germans still admit to indulging in a slice of Apfelstrüdel or some other sweet delight with a steaming mug of coffee at least once a week, this number has fallen off worryingly since 2010, when 64 percent still managed to fit it into the busy schedule of watching police shows.

Meanwhile 59 percent of respondents said that they weren't active in a Verein, a traditional cornerstone of German life, which covers everything from mountaineering, to photography, to baking.

Another interest often associated with Germans is a love of the outdoors and exploring the country's glorious nature. But 74 percent of the people in the survey said they never went camping or caravaning. Income was the best indicator of what sort of free time activities Germans got up to.

Unsurprisingly, the wealthier Germans are the more likely they are to spend cash in their free time. Restaurants, the theatre, ballet or art exhibitions are all places to be seen for the elite. While having a smart phone in hand is also a must.

Poorer people on the other hand are more likely to be found having a chat with the neighbour, taking an afternoon nap or simply 'doing nothing,' the study found.