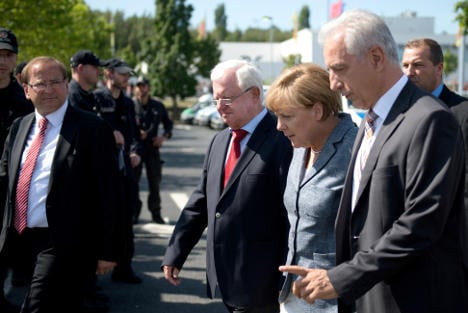 Around 200 people in the eastern town of Heidenau jeered Merkel from across a road, shouting far-right slogans including “traitor, traitor” and “we are the mob”.

Merkel vowed that Germany would have “no tolerance” for “shameful and vile” attacks on asylum-seekers, after a wave of violent protests.

“There will be no tolerance of those who question the dignity of other people,” she said in the small eastern town of Heidenau which saw far-right riots against police guarding a new refugee shelter.

“The more people who make that clear… through their work and also in conversations with acquaintances, friends and families, the stronger we will be and the better we will be able to address this task” of caring for refugees, she said.

Amid heightened tensions in the town over the opening of a new shelter for asylum-seekers in a former DIY store, Merkel's Vice Chancellor Sigmar Gabriel had blasted far-right protesters as a “mob” during a visit to the town on Monday.

Gabriel's Social Democratic Party (SPD) headquarters were evacuated on Tuesday after a bomb threat, which party leaders attributed to the Vice Chancellor's comments. The party said it had received “a flood of threats” and xenophobic hate speech since Monday.

During Merkel's visit to Heidenau on Wednesday, several drivers honked their car horns as they passed the spot where the Chancellor was standing, following calls to do so by extremist groups on social media.

Merkel was welcomed by Saxony state premier Stanislaw Tillich and the town's mayor Juergen Opitz and later held talks with refugees and social workers at the centre.

For two nights in a row last weekend, violence erupted after far-right demonstrators attacked police at a protest against the opening of the new centre for refugees.

A 'dark Germany' behind xenophobic attacks

As Germany prepares to receive a record 800,000 asylum-seekers this year, a spate of attacks has hit refugee centres, including two incidents reported just hours before Merkel's visit to Heidenau.

President Joachim Gauck blasted a “dark Germany” behind the series of xenophobic attacks, as German leaders went on the offensive to quell the wave of anti-migrant violence.

The Interior Ministry said on Tuesday it had stopped returning Syrian asylum-seekers to their first EU port of entry, becoming the first member state to effectively simplify the application process for those fleeing Syria's years-long civil war.

Natasha Bertaud, spokeswoman for the EU Commission, said Berlin's move was “recognition of the fact that we cannot leave the member states at the external borders alone in dealing with a large number of asylum-seekers”.

Under the so-called Dublin rules, the first EU country where an asylum-seeker arrives is usually required to process the claimant's application.

In practice, this means countries on the EU's southern borders like Greece or Italy are overwhelmed with applications as thousands arrive after a dangerous journey across the Mediterranean.