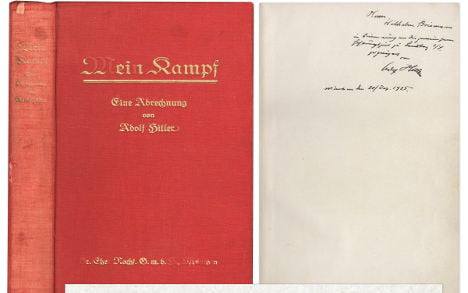 On the inside cover of the book Hitler wrote in scrawling handwriting: “To Mr. Wilhelm Briemann in remembrance of our joint prison time in Landsberg a. /L. [Landsberg am Lech] dedicated by Adolf Hitler / Munich December 20, 1925.''

Briemann appears to have been a member of Hitler's Stoßtrupp, a band of para-militaries which took part in the Munich Putsch of November 1923, the event which led to Hitler's imprisonment on a charge of high treason.

It was during his time in Landsberg prison between 1923-24 that Hitler wrote his infamous manifesto, which blamed Germany's economic and political woes on Jews, Marxists, Social Democrats and the political leadership of the Weimar Republic.

“The Hitler book is probably a one-of-a-kind. There has been no other signed copy of Mein Kampf inscribed to a fellow inmate at Landsberg,“ said auction owner Nate Sanders in a statement.

“It was at Landsberg prison that Hitler served time for high treason and wrote Mein Kampf. Signed copies of Mein Kampf are rare; this is even more so.”

While trade in Nazi memorabilia is illegal in Germany and several other European countries, no such barriers exist in the US or Great Britain, where auction houses have seen a boom in the trade in recent years.

But profiting from the Nazi period remains controversial, with several leading auction houses including Bonhams and Sotheby's not trading in the lucrative artifacts.

But these numbers are dwarfed by sums paid for other pieces of Nazi memorabilia in recent years.

In 2011 Spiegel reported that the journals of notorious concentration camp doctor Josef Mengele during his exile in South American after the war were sold for €224,000.

SEE ALSO: Hitler watercolours to go under the hammer