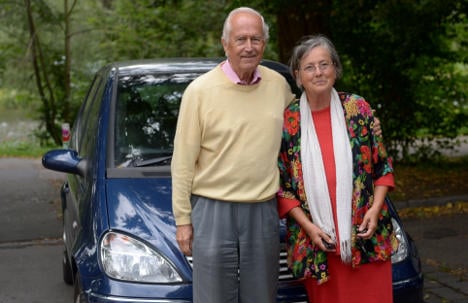 Björn Brandvold and Gertrud Kreuter in front of the Norwegian's Mercedes. Photo: DPA

Björn Brandvold never meant to stay long in Hanover. He was driving from Andorra back to Oslo, but decided to stop in the north German city to take money out at a bank.

After he was unable to get money out at the first bank, he went further afield. But when he finally withdrew money, he realized he had no idea how to retrace his steps – and he'd lost the piece of paper where he'd written down the name of street he'd parked on.

Although his search was long and frustrating, he found support along the way. Gertrud Kreuter, a 73-year-old local, decided to help him when he told her about the fix he was in. She helped him look and even gave him a place to sleep throughout the three weeks.

The local press also became interested in the story. The Hannoverische Allgemeine Zeituing (HAZ) publicized his story and asked people to get in touch if they had seen a dark blue Mercedes with a foreign licence plate parked in their neighbourhood.

Although the two pensioners also got in touch with the police, officers proved to be of little help in solving the mystery.

In the end it was HAZ's help that led Brandvold back to his wheels – a reader of the paper had noticed an abandoned car parked in front of her house.

“I would have never searched there,” the Norwegian told Bild. “I must have walked really far that night.”

Kreuter said that her new friend was delighted to have his car back and that they were now planning his trip back to Oslo.