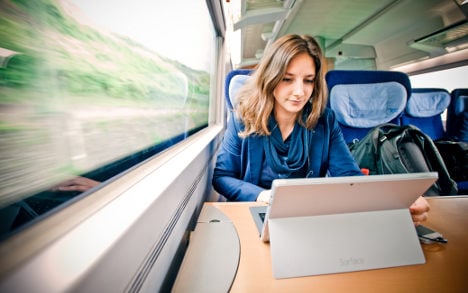 It is a problem which ever-more young people who skip from one city to the next in pursuit of work, education, and love face.

Leonie Müller was trying to balance between studying in Tübingen and living in Stuttgart – both in the south west of the country – with visiting her boyfriend in Cologne and her grandmother in her hometown Bielefeld – both in west Germany – and still finding time to see her mother, who had recently moved to Berlin in the northeast.

Something had to give.

So Müller decided to give up her apartment and buy a year's unlimited travel ticket from rail operator Deutsche Bahn (DB), which would allow her to travel wherever she wants, whenever she wants.

The ticket costs €340 per month, considerably less than the €400 she was paying for her apartment.

In any given week the intrepid student travels between 1,200 and 2,000 kilometers in zigzags across the country, reports Der Spiegel.

A wink and a smile

“As far as we know this is the only case of someone using the card this intensively,” DB spokesman Jürgen Kornmann told The Local, “but in principle it's a flat-rate and I can imagine that there might be other heavy users.

“The product is there to give people the tools to organize their train travel however they like.”

While Kornmann insisted that DB had nothing to do with Müller's living arrangements, he acknowledged that “of course it's good PR for us.”

“Our advertising slogan recently has been 'this time belongs to you' – it's not the same on the train as in a plane or the car. It's great that this student has brought this to others' attention,” he said.

“Of course, we wouldn't encourage everyone to quite their flats and use the Bahn to stay with their friends and relatives, but we see Müller with a smile and a wink.”

With Müller she takes her university work, a tablet, a change of clothing and toiletries. A jacket that she has with her also serves as a duvet for when she wants a nap.

Through writing a blog about he experiences she has gained media attention and has something to use in her Bachelors work for her media studies course.

She came to the idea after travelling for nine months around the world.

“At home no one perceives it as travel,” she said. But she sees herself as a traveller rather than an extreme commuter – a lifestyle that has liberated and challenged her in equal measure.

“I always have to ask myself what I want, what I need,” she said.

And for her semester break she has decided to visit the four furthest corners of Germany – naturally by train.

But some people simply don't understand this decision, she said.

“Some people feel attacked, as if I'm bringing the very order of their existence into question,” she said. One person recently asked her how long she plans to go on scrounging off other people.

But she is careful to ensure that she never becomes a burden on people and has told the friend whom she stays with in Stuttgart that if it ever becomes too much, she should say so.

As for the more practical difficulties she has tended to find ways around them. Even washing her hair can be done while she travels in the on-board bathroom.

“The time between Mannheim and Stuttgart is perfect for it,” Müller said.