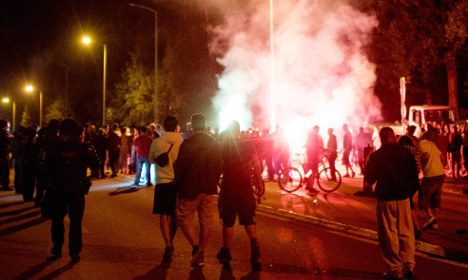 Protests in Heidenau turned violent as right-wing demonstrators clashed with police at the weekend. Photo:DPA.

Gabriel has changed his holiday plans in order to accommodate a visit to the east German town, representatives for the Social Democratic Party (SPD) leader announced on Monday.

Interior Minister Thomas de Maizière also reacted to the violence over the weekend, stressing on Sunday that “the state must not back off.”

“When it has been decided that a place will be home to asylum-seekers and refugees, then this decision cannot be changed through demonstrations,” De Maizière said.

Violence was sparked on Friday when hundreds of supporters of the far-right National Democratic Party (NDP) gathered in front of a former DIY superstore which has been rebuilt to house 320 refugees by Sunday, with a total capacity of 600.

The protests turned violent when demonstrators threw stones, bottles and firecrackers at police who responded by firing tear gas.

The situation had mostly calmed by Saturday morning by which time more than 30 officers as well as numerous protesters were reportedly injured. But sporadic fighting between left- and right-wing demonstrators continued into the early hours of Monday.

“Boundaries have been crossed here and I can hardly put it into words,” Tillich said, adding that he would assure “the state's monopoly on violence”.

Meanwhile a planned refugee home went up in flames in Unterweissach, Baden-Württemberg early Monday morning, though it was not yet clear whether the fire was started by arson or otherwise.