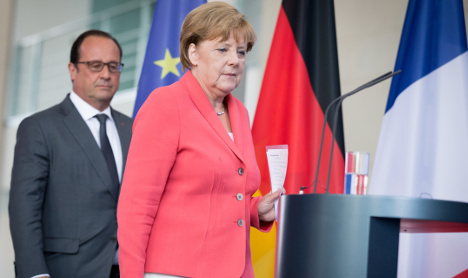 “There was an aggressive, xenophobic atmosphere that is in no way acceptable. It's repulsive how the far right and neo-Nazis are trying to spread their hollow messages of hate.,” Merkel said at a Berlin meeting to discuss Europe's refugee crisis with French President Francois Hollande.

“But it's equally shameful that citizens, even families with children, should once again support these things by participating,” she added.

“Germany is a country that respects the dignity of every human being,” Merkel continued, adding that anyone should have the opportunity to apply for asylum and that she and other political leaders would work to make that so.

“I am glad that the vast majority of people do things in exactly the same way,” she said.

Hollande told journalists that “no situation, however painful, can justify these acts.”

But he added that growing numbers of refugees were a burden for the countries that were taking on the greatest numbers.

“We can see what tensions this can bring out,” he said.

Merkel had earlier condemned “vile” violent demonstrations against refugees at the weekend through a spokesman amid criticism she has failed to forcefully address anti-migrant sentiment.

After clashes erupted in eastern Germany over two nights between police and far-right thugs protesting the opening of a new centre for refugees, Merkel's spokesman Steffen Seibert said Berlin would not stand for hostility against the newcomers. “The Chancellor and the entire government condemn the violent rampages and the aggressively xenophobic atmosphere in the strongest terms,” Seibert told reporters, using his strongest language to date to address a wave of anti-refugee violence in Germany.

“It is vile how right-wing extremists and neo-Nazis try to spread their hollow, hateful messages. Those who act like the aggressors of Heidenau place themselves far outside the law.”

Seibert called it “shameful” to see citizens, even families with children, joining the protests “to back this horrific sentiment”.

Germany is a “compassionate” country and will not allow refugees “to be met here by hateful slogans or alcohol-fuelled loud mouths”.

He said all asylum-seekers, regardless of whether their claims would ultimately be approved, deserved to be treated with “dignity and respect”.

Merkel, faced growing calls over the weekend to speak out on aggression against refugees following the clashes in Heidenau on Friday and Saturday night.

Merkel's vice chancellor, Sigmar Gabriel, visited Heidenau on Monday and said Germany should not cede “a single millimetre to this right-wing radical mob”.

Germany is bracing for a record influx of up to 800,000 asylum-seekers this year and has registered more than 200 attacks against shelters housing or due to house refugees since January.

“Germany today is a country that is open to the world and – even in light of the most recent events in Saxony, I stand by it – a tolerant, culturally rich, diverse country,” he told a gathering of German ambassadors.