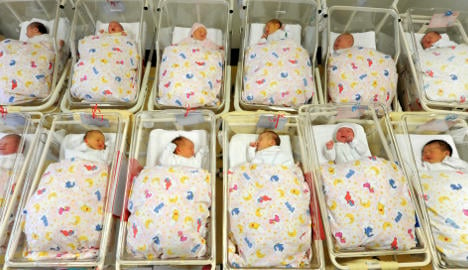 The statistics office said that nearly 715,000 newborns arrived in Germany in 2014, an increase of 4.8 percent on the previous year and the largest number of births since 2002.

“This is a good signal that there will again be more children born in Germany,” said Family Minister Manuela Schwesig in a statement.

“We must make further efforts to properly support families in Germany.”

Germany has seen extremely low birth rates in recent years – the lowest in the world, according to a recent study by the Hamburg Institute of International Economics.

Coupled with the fact that since 1972 more people have died each year than babies were born, many have voiced concern about the long-term impacts of a shrinking workforce, especially as baby-boomers age into retirement.

The federal statistics office predicted in April that Germany’s population would see a decline of 10 million people by 2060 if such low birth rates and high death rates continue. And such a gap could not be closed by the influx of immigrants, the office said.