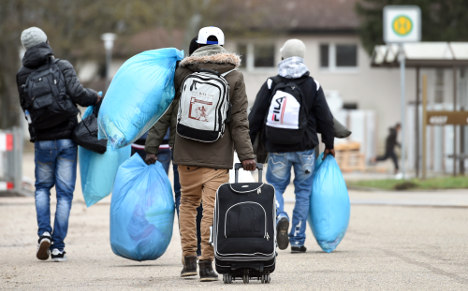 The ZDF/Tagesspiegel 'Politbarometer' poll published on Friday revealed that around 60 per cent of respondents thought Germany was able to take on rising numbers of asylum seekers.

That's a big increase on a similar survey last month, when only 54 per cent believed Germany could cope with rising numbers.

While most thought rising immigration wouldn't be a problem, a clear majority were in favour of treating refugees differently depending on their likely eligibility to stay in Germany.

Last month the Bavarian state government suggested that asylum seekers from the Balkans should be housed and processed separately from others, because they were much less likely to see their applications granted.

Almost three-quarters of Germans surveyed (74 per cent) thought that such measures were a good idea.

Meanwhile, only 23 per cent thought all those arriving as refugees should be treated equally.

A 'country of immigrants'

Over two-thirds (69 per cent) of Germans surveyed thought financial aid offered to refugees should be reduced, and replaced with non-financial aid such as food packages and coupons.

However, only around a third of those questioned thought this shifting of aid would reduce the number of asylum seekers heading into Germany.

That might give government ministers arguing for reduced benefits for asylum seekers pause for thought.

Most Germans surveyed were in favour of a new law to govern immigration, as called for by the SPD and the Greens.

And while in April only 59 per cent thought there should be additional regulations to control the influx of workers from non-EU countries, this latest survey saw support rise to 77 per cent.

Meanwhile, 86 per cent of those surveyed viewed Germany as a “country of immigrants.”

Researchers contacted  1,251 randomly chosen eligible voters by phone to carry out the poll between Tuesday and Thursday this week.

The government announced on Wednesday that Germany could expect up to 800,000 asylum applications in 2015.