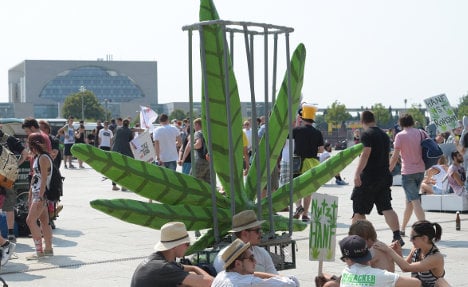 The move is the result of a joint push by the three parties which form the city's governing coalition, the Social Democratic Party (SPD), Greens and Free Democratic Party (FDP), the Frankfurter Allgemeine Zeitung reports.

The “traffic-light coalition” (red, green and yellow are the parties' respective colours) in the North Rhine-Westphalian capital came together on Wednesday to pass a plan providing for a strictly-regulated cannabis trade that would provide the drug to adults.

“Study, prevention and aid fall short because of criminalization,” Green councillors Angela Hebeler and Norbert Czerwinski wrote on their party's blog on Thursday, adding that “the number of [cannabis] consumers fell drastically after it was decriminalized, for example in Portugal and the Netherlands.”

“Controlled trade in cannabis products… opens up a possibility for sensible regulation that the black market obviously doesn't permit. This would undermine the foundations of illegal trade,” they go on.

“We must investigate whether people with problematic consumption patterns can be more easily reached with this form of access and whether harm to health can be reduced by more effective consumer protection.”

Now civil servants in Düsseldorf must apply to the Federal Institute for Medicines (BfArM) for a license.

Councillors from the Düsseldorf faction of Chancellor Angela Merkel's conservative Christian Democratic Union (CDU) have vowed to oppose the plans for the pilot project.

They'll be following in the footsteps of Berlin district Friedrichshain-Kreuzberg, which was the first local authority in Germany to apply for a cannabis license at the end of June this year.

Faced with an intensive cannabis trade in the district's parks, the Green party mayor asked the BfArM for permission to offer the drug legally so as to reduce crime in the area and limit health risks and sales to minors.

The capital's branch of the SPD may also ask members whether they are in favour of the policy in a survey planned for later this year.

Greens are the grass-friendliest party

The Green party has traditionally been at the forefront of calls for cannabis legalization.

Green state leaders in Baden-Württemberg and Bremen have also called for the drug to be legalized.

And the party introduced draft legislation in the Bundestag (German parliament) earlier this year in a bid to focus attention on the issue.

It would allow adults to possess up to 30 grammes of cannabis legally and grow up to three plants in their home, as well as providing for trade in the drug to be taxed.

There is almost no chance of the Green bill passing, however, with MPs in the CDU strictly opposed to the idea of legalization.

They argue that cannabis is not the harmless drug that its proponents believe, and that it can trigger serious mental illnesses like depression.