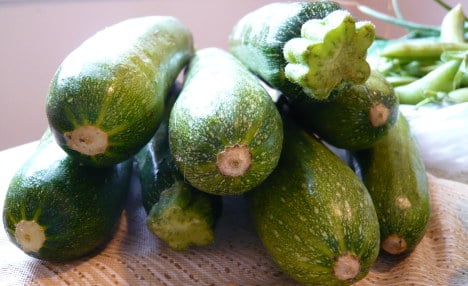 Ludwig A. died in hospital two weeks after eating a courgette stew tainted with poison, Bild reported on Wednesday.

The courgettes were home-grown, and had been given to the pensioner and his wife Inge by neighbours at their Heidelberg home.

But neither the couple nor their neighbours were aware of the dangerous toxins hidden within the plants.

“The stew did taste bitter,” Inge A. told Bild. “But we're used to bitter. We grow radishes in our garden, which also have this bitter taste.”

But shortly after eating the meal, the couple began to feel unwell.

For her husband, things were even worse. “His face had turned completely yellow,” Inge remembered.

The pair were rushed to hospital, where they were diagnosed with severe poisoning.

80-year-old Inge gradually recovered, and was released from hospital after a few days. However, her husband had ingested so much of the poison that he later died.

The substance was one of a group of chemicals named cucurbitacins.

These naturally occurring toxins are occasionally found in pumpkins and gourds such as courgettes, and are designed to defend the plants from herbivores.

When ingested by humans, they can cause sickness, diarrhea and in some cases, death.

Cucurbitacins can be recognised by their bitter taste. Any courgette that has a strong unpleasant smell or tastes particularly bitter should be avoided.

“Cucurbitacins are toxic at high levels, but they are so bitter that it is almost impossible for anyone to eat sufficient quantities of the toxins to cause significant harm,” advises The Food Safety Hazard Guidebook.

For Inge, this held true. Dr Neubert Pfeufer of the accident and emergency department told Bild: “She had eaten much less of the stew, because it tasted so bitter.”

However, 79-year-old Ludwig cleared his plate of poisonous courgette stew, meaning medics were unable to save him.

Cucurbitacins have been bred out of most commercially sold seeds, Bild reports – meaning gardeners who go out and buy a seed pack to grow their own courgettes shouldn't need to worry about the toxins.

However, using seeds from previous years can be dangerous, they warn.

Gardeners should also avoid growing gourds next to ornamental breeds of pumpkin. These contain toxic substances which can end up infecting edible varieties through cross-pollination.