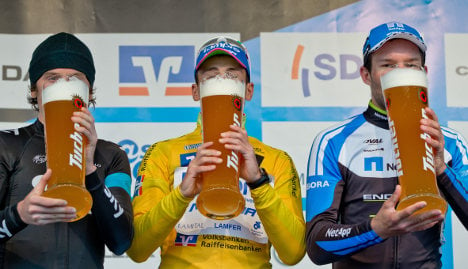 You may be able to drink your weight (or height) in beer, but climate change might make it less affordable to do so. Photo: DPA

The study, commissioned by the Green Party and released on Thursday, analyzes current research on how climate change will impact Germany by 2050.

One of the consequences of shifting weather patterns is the effect it could have on growing hops – the flower used to flavour and stabilize beer during brewing.

The Bavarian region of Hallertau is the largest hop-growing area globally, producing more than half of the plants in Europe and a third of the hops for the world, the report states.

But the region has experienced “extreme weather events” such as hail and heavy rain in recent years, leading to increased crop failures.

In the past five years, there have been five hail storms in the area: normally there should only be one hail storm within this time period, the report states.

These weather effects could lead to a shortage of hops, driving up the price of beer.

Severe storms may only intensify with climate change, and such variable conditions make it harder for farmers to plan.

That means they'll have to spend more on insurance and measures to combat the effects of climate change, such as protecting plants against intense rainfall and soil erosion.

These efforts and higher insurance premiums could also thus raise the prices of beer.

Spokesperson for the German Brewers Association Marc-Oliver Huhnholz told The Local that it was definitely possible for climate change to drive up the costs of beer, but not in the short-term because of the way hops are dried and stored.

“German and other beer is of course a product from nature, and is very dependent on raw materials like hops,” Huhnholz said. “When materials are scarce, then of course brewers must increase their prices, but the raw materials are just part of a greater price equation. Water and energy prices also play a role.

“But if we have an environmental catastrophe, then we also have bigger problems.”

The Green Party report said that the overall German beer production would not be in danger, though.

Prices have increased in the past due to bad weather conditions, like in the summer of 2003 when there was a drought.

Too hot to handle

Another consequence of climate change is the intensifying heat, the report explains.

Europe has experienced an unusually powerful heatwave this summer, with temperatures reaching the highest ever recorded in Germany at over 40C.

This weekend is expected to be less hot in most of the country, with highs of around 28C on Saturday and rain in southern as well as western areas by Monday.

The study says that due to climate change, increased temperatures may cause heat stress and increase mortality rates in major cities, like Cologne, Stuttgart and Berlin, where temperatures in this summer have been around ten degrees higher than in the surrounding areas.

Persistent heat is especially harmful to the elderly and it can be deadly.

“This can become a very unpleasant and expensive weather chaos if we don’t change our course more clearly,” Green party member and head of the German parliament’s environmental committee Bärbel Höhn said in a statement on Thursday.