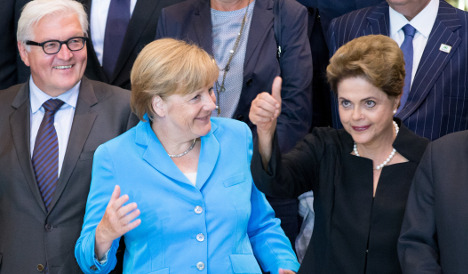 “We are very satisfied that there have been very ambitious developments concerning the stopping of deforestation,” Merkel said before talks with President Dilma Rousseff in the Brazilian capital.

Merkel said protection of the Amazon was not just vital to Brazil's climate policies, but to the entire globe.

Achieving an agreement to target a maximum of two degrees Celsius of global warming was one of the Chancellor's key goals at a G7 summit meeting in Bavaria earlier this year.

Brazil, Latin America's biggest economy, has made a priority of stopping what was once runaway forest clearance for new agricultural lands.

However, the rate of destruction has picked up again this year, according to NGOs that monitor the Amazon.

With its giant forests, Brazil is a central player in world climate talks as governments negotiate on how to reduce global warming.

In Brussels on Thursday, EU Commissioner Miguel Arias Canete urged Brazil, along with India, Indonesia, Argentina, and other big countries, to immediately submit targets for emissions reductions in time for a UN climate summit in Paris late this year.

In March, the European Union, the world's third biggest emitter, became one of the first blocs or countries to formally submit its pledge to the United Nations.

The second biggest polluter the United States and the number one emitter China have also submitted their pledges in the last few months.