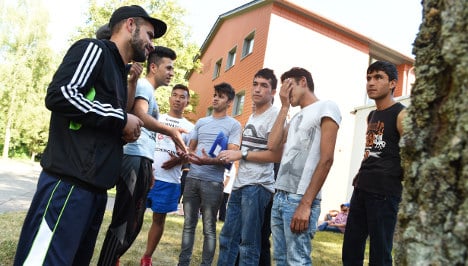 Journalists at the Frankfurter Allgemeine Zeitung arrived at the figure simply by multiplying the flat rate local governments are paid by their states per refugee of between €12,000 and €13,000 by 800,000.

State governments had until now been planning to spend a total of between €5 and €6 billion on supporting the 450,000 anticipated asylum seekers this year.

But Interior Minister Thomas de Maizière's announcement on Wednesday that the figure could increase by more than two-thirds has prompted fresh calls for the federal government to stump up more cash.

While de Maizière acknowledged that the refugee numbers represented “a real challenge” for the country, he insisted on Wednesday that “Germany is not overwhelmed.”

And it's less than one-fifth of the cash risked by Germany in emergency lending to Greece over that country's three bailout programmes.

'Federal government should do more'

Last year, the total amount spent by the federal states on supporting refugees was €2.2 billion.

“The federal government must quickly say how it will take on a share of the costs of caring for refugees in a long-term, structural way,” North Rhine-Westphalia minister-president Hannelore Kraft said on Wednesday.

Ministers in Berlin have so far promised €1 billion extra to be divided among the states – far short of the total needed.

Some state governments are already calling for tax increases to pay the differences.

The state must “improve things on the income side,” Schleswig-Holstein finance minister Monika Heinold said, adding that wealthier people should bear the lion's share of the burden through an increase in inheritance tax and the financial transactions tax.

Heinold added that the solidarity charge, which has been added to everyone's taxes since reunification to fund reconstruction in the former East Germany, should be diverted towards the asylum system.

The northerly state has already tripled its asylum budget for 2015 to €300 million.