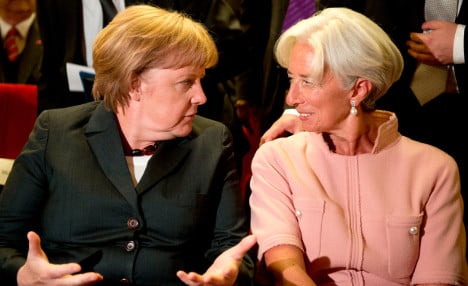 Monday's front page of mass-circulation daily Bild accused Merkel of breaking her promise that the IMF would be party to the new €86 billion Greek bailout approved by eurozone finance ministers on Friday.

The Fund, whose chief Christine Lagarde has called the plan “a very important step forward,” has said it will wait until October to decide whether to participate in it.

But that is two months away, and Merkel and her Finance Minister Wolfgang Schäuble need to secure the backing on Wednesday from the German lower house of parliament, or Bundestag, for Greece's third bailout since 2010.

Further complicating matters are IMF demands of debt relief for Greece, whose debt is equivalent to 170 percent of gross domestic product — a notion viewed with hostility by most Germans.

Germany argues that an outright debt “haircut” would breach EU treaties, but repeated last week that it remains open to future talks on debt restructuring.

Debt relief ranges from reducing the outstanding principal amount of a loan to lowering interest rates or extending the repayment period.

In an interview on German public television on Sunday, Merkel expressed confidence that the IMF would participate in the bailout.

One CDU legislator, Michael Fuchs, told Bloomberg TV that he had not yet decided whether he would vote for or against the Greek accord on Wednesday.

Fuchs also speculated without a clear sign from the IMF that it would be involved in the bailout, the number of “No” votes could increase.

The tally of such dissenting votes would still not be enough to pose a major risk to Wednesday's passage of the deal, but they could reflect growing resistance within both the party and the public that Merkel would be unable to ignore.

“The IMF has a reputation as being tough and independent, much more so than the European Commission. If the IMF endorses a programme, it helps Merkel to sell that programme to her own party and the German public at large. That is why Merkel would like to keep the IMF on board,” said Berenberg Bank economist Holger Schmieding.

Natixis economist Sylvain Broyer said Berlin regards the IMF as an insurance policy, since it would offer an “implicit guarantee that the bailout funds will be repaid.”

It was indeed Germany, back in the first bailout in 2010, which called for the IMF to participate and provide its technical expertise in aid programmes.

For Merkel's coalition partners, the Social Democrats, the IMF's involvement appears to be less crucial.

The deputy head of the SPD's parliamentary faction, Carsten Schneider, insisted the IMF's participation was “not a deal breaker” in the vote.

What was important, he noted, was the IMF remaining as an advisor to help Greece return to economic growth.

Nevertheless, Merkel is finding herself backed into a corner by the IMF's debt relief demands, which would be tough to sell to her party.

On Friday Lagarde stated Greece's debt “has become unsustainable and that Greece cannot restore debt sustainability solely through actions on its own.”

“We look forward to working closely with Greece and its European partners in the coming months to put in place all the elements needed for me to recommend to the fund's executive board to consider further financial support for Greece,” she said.

MPs from the Bundestag are being called back from summer recess to vote on the bailout, after initially having to return from the break July 17th for a vote approving resumption of bailout negotiations.

Analysts say approval of the new deal is almost certain, with Merkel's governing coalition of conservatives and Social Democrats controlling 504 of the assembly's 631 seats.

What remains to be seen, however, is the scope of a possible revolt among Merkel's fellow conservatives.

The July 17th vote, for example, was opposed by 60 of the 311 legislators in Merkel's bloc, and was seen as a blow to the popular chancellor on her 61st birthday.