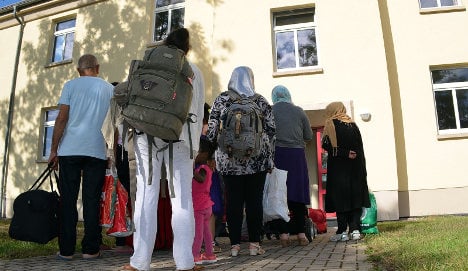 “We have to spread the responsibility across more shoulders,” António Guterres told Die Welt on Tuesday.

“It is not sustainable in the long term that only two EU countries with capable asylum structures – Germany and Sweden – take up the majority of refugees.”

On Tuesday, business daily Handelsblatt reported that the federal government would release forecasts on Wednesday showing that it expects as many as 750,000 asylum seekers to arrive this year – an increase of two-thirds over the previous official estimate of 450,000.

Sweden may take up to 74,000 asylum seekers this year, and took 13 percent of the European total in 2014 –  a massive number proportionate to the size of the country's population.

But Guterres warned that the number of refugees arriving shouldn't be allowed to impact countries' readiness to help.

“Most of the people who come across the Mediterranean in boats are fleeing conflicts and persecution,” he said.

“All the countries in Europe have the moral duty to welcome them, and they have a clear legal obligation to protect them.”

In a TV interview at the weekend, Merkel tried to soothe the worries of conservative German voters over the number of people turning to Germany for asylum.

Europe needed to “take joint action” to address the problem that would “preoccupy Europe much, much more than the issue of Greece,” she said.

Her proposed solutions include establishing a Europe-wide list of safe countries of origin, whose citizens would automatically be ruled out of applying for asylum.

She also said that asylum conditions should be standardized across European countries so as to even out their attractiveness to refugees.

On Monday, International Development Minister Gerd Müller said that the EU should finance a €10 billion aid programme for countries neighbouring Syria so as “to help people in the place where they have first fled in their greatest need”.

Germany should do more

Green party spokesman and Bundestag (German parliament) vice-president Claudia Roth wrote in a blog post on Monday that the government's calls for joint EU action were “hackneyed and tiring”.

“Every few months, Minister Müller goes public with a demand for billions from the EU,” she wrote.

“His demand obviously shouldn't distract us from the unfulfilled promises and the responsibility of Germany.”

Roth added that rather than call for the EU to divert cash from existing projects, Germany should fulfill its commitment to spend 0.7 percent of its GDP on “global justice”.

Politicians from Merkel's Christian Democratic Union (CDU) and their allies in the Bavarian Christian Social Union (CSU) have been targeting asylum seekers from the Balkans for special hostility in recent days, saying they are exploiting the German system for money.

“Experience shows that asylum seekers from the Balkans in particular admit that they come to us for financial reasons,” CSU migration spokesman Stephan Mayer claimed on Monday.

Balkan refugees make a “calculation” to stay in Germany and collect money for five or six months “so as to be able to finance their own family in Kosovo or Albania for 12 to 15 months,” he said.

Mayer also demanded that 800 extra police officers be deployed to the Austria-Bavaria border to prevent migrants from crossing into Germany.

But in a piece suggesting that refugees could become the “problem of the century”, the Süddeutsche Zeitung warned that such language directed at migrants from the Balkans could end up harming Sinti and Roma people.

“The Roma have no home, not in the Balkans, not in Germany, not in France,” the paper argued.

But “the subtext of the current debate is that we'd like to be rid of the Roma and take Syrians instead.”