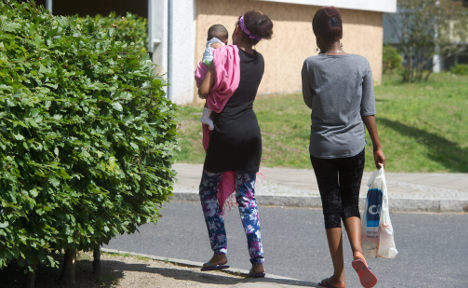 Residents of the asylum seekers' shelter in Torgelow, which came under attack this week. Photo: DPA

The East German states of Berlin, Brandenburg, Mecklenburg-Western Pomerania, Saxony, Saxony-Anhalt and Thuringia were re-absorbed into the Federal Republic of Germany after reunification in 1990.

Only around 20 per cent of the population lives in the former German Democratic Republic (GDR).

But 47 per cent of all racially motivated crimes in Germany last year were committed in these states, reports Süddeutsche Zeitung.

Overall, 130 racist acts of violence were recorded in Germany last year. Sixty-one of these were in the eastern states.

North Rhine-Westphalia saw the highest number of right-wing extremist crimes, with 370 recorded in the western state.

Berlin came second with 111 recorded cases, followed by Saxony (86) and Brandenburg (73) – despite these states having much smaller populations than western regions lower down the list.

Handling of crimes 'not up to scratch'

Across Germany, only around 45 per cent of right-wing politically motivated crimes were resolved in 2014.

This rate for violent crimes was higher at 64 percent – but still 14 percentage points lower than the year before.

In 2014, the number of right-wing extremist crimes recorded by non-government organizations in East Germany was almost double that recorded by the government, she told Mitteldeutscher Zeitung.

It's clear from this that “the police system for analysing right-wing extremist crimes still isn't working properly”, Mihalic claimed.

The Interior Ministry responded that the federal and state governments recorded every single relevant crime that became known to them – but that some far-right crimes were never reported to the police.

Another attack in East Germany

This week, yet another shelter for asylum seekers came under attack in the eastern state of Mecklenburg-Vorpommern.

Unidentified individuals threw fireworks from a vehicle at the shelter in  Drögeheide, Torgelow on Monday evening, reports RP Online.

A security firm employee witnessed the attack, and alerted police – but officers were unable to trace the vehicle or the perpetrators.