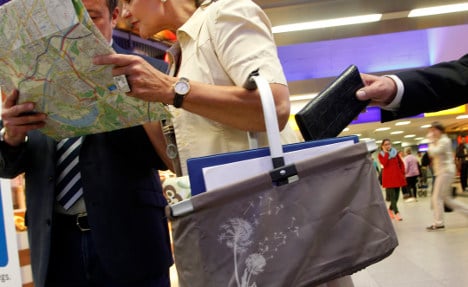 In train stations across Germany, posters and floor displays catch travellers' eyes with their distinctive red, yellow and black graphics.

“Achten Sie auf Ihre Wertsachen,” they warn. And in English: “Look after your valuables.”

The messages are part of a campaign launched by police in association with Deutsche Bahn.

Aiming to remind passengers of the importance of looking after their possessions, the campaign hopes to tackle a growing problem in German's busiest train stations: pickpocketing.

Figures for pickpocketing have risen sharply across Germany in recent years. Last year alone, police recorded some 35,760 incidents – a 19 per cent increase on 2013 figures.

The trend looks set to continue. In the first half of 2015, around 20,200 cases have already been recorded across the country – a 22 per cent increase compared with the same time period last year.

“In most cases, the thieves work in groups, and they often also operate in several European countries,” said a spokesperson for Potsdam police headquarters in a statement.

Pickpockets are often “professional and international criminals,” he added.

Victims of this kind of crime are unlikely to get their valuables back – with most only realizing long after the theft itself that their items are gone.

Thieves often work in groups of between three and six, police explained.

“One member of the group keeps a lookout and another distracts the victim, while a third member carries out the robbery,” a spokesperson described.

Pickpockets often have a range of distraction maneuvers at their fingertips, police said.

One of these sees a group member “accidentally” spilling a drink on an intended victim. While the victim is distracted and being helped to clean up, another group member approaches and carries out the theft.

In other cases, a group member will feign drunkenness, and stagger towards a traveler. While the victim is distracted, they are robbed by an accomplice.

Police are warning travellers to avoid careless behaviour in pickpocketing hotspots – for example, leaving bags unattended, or carrying an open bag with phone and wallet clearly visible and accessible.