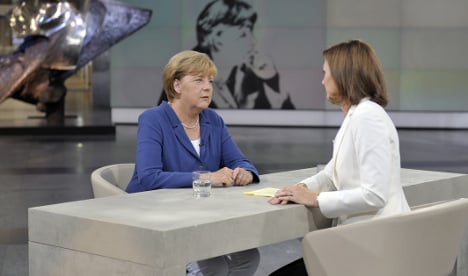 Asked about more than 200 arson attacks against homes for asylum-seekers seen in Germany this year as the country faces a record influx of refugees, Merkel said: “That is unworthy of our country.”

Merkel warned that waves of refugees would “preoccupy Europe much, much more than the issue of Greece and the stability of the euro”.

“The issue of asylum could be the next major European project, in which we show whether we are really able to take joint action,” she told ZDF public television in the first of a series of traditional “summer interviews” with leading politicians.

For Germany, where some officials have said the number of asylum-seekers could top 600,000 this year, Merkel said the issue posed particular challenges.

With thousands of refugees sleeping in tents and authorities saying they are overwhelmed with applications, Merkel said the current situation was “absolutely unsatisfactory”.

She called for the European Union to establish a list of safe countries of origin, where citizens are not under threat of violence or persecution.

Last week Interior Minister Thomas de Maiziere said it was “unacceptable” that 40 percent of asylum-seekers in his country were from the Balkans, calling it “an embarrassment for Europe”.

About half of Germany's 300,000 asylum applications since January have come from the southeast European region that includes Albania, Bosnia, Bulgaria, Croatia, Kosovo, Macedonia, Montenegro and Serbia.

The federal government's new tone chimes with demands coming from politicians in the German states which have seen the most asylum seekers arriving, such as Bavaria.

“The grants for [asylum seekers from the Balkans] are an imposition on German taxpayers,” Bavarian interior minister Joachim Hermann told Die Welt on Monday, adding that they were drawing people who didn't need protection to come to Germany.
Germany “has the job of preventing hopeless asylum applications” from people coming out of safe countries, MEP and Serbia expert David McAllister of Merkel's Christian Democratic Union (CDU) told Bild on Monday.

Berlin is looking at ways to deter such claims in order to better serve people from crisis zones such as Syria, Iraq and Afghanistan.

The UN refugee agency has said the number of people driven from their homes by conflict and crisis has topped 50 million for the first time since World War II, with Syrians hardest hit.