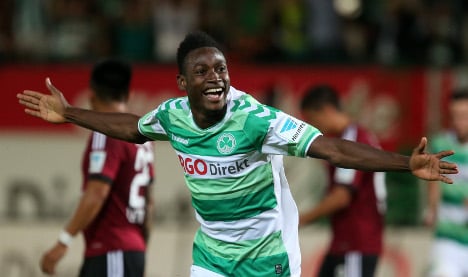 With bonuses, the deal could exceed €30 million — more than Augsburg's budget for the season.

The 21-year-old cost just €2.5 million when he joined Augsburg last year from German second-division club Greuther Fuerth, who are now set to get a 25 percent share from his sale to Chelsea.

“Abdul Baba Rahman has developed enormously is his one year with us and made a giant leap,” said Augsburg's chief executive Stefan Reuter.

“It's not just a reward for his performances, but also for our work, if an international giant like Chelsea shows interest.”

Baba passed a medical on Saturday and is off to battle for the Blues' left-back berth following the departure of Brazil defender Filipe Luis back to Atletico Madrid after only one season at Stamford Bridge.

“I have to take this opportunity to play at a top club in England, even if I had planned on a long-term stay at Augsburg only a year ago,” said Baba.

“It is important because he is a left-back, so he can compete with (Cesar) Azpilicueta,” said Mourinho after his team's 3-0 defeat to Manchester City.

“At the same time, Azpilicueta can compete with (Branislav) Ivanovic for the right-back position, so he replaces Filipe Luis in the balance of the squad.”

Rahman has made 13 appearances for the Black Stars and played in the African Cup of Nations defeat to the Ivory Coast on penalties in the final in January.