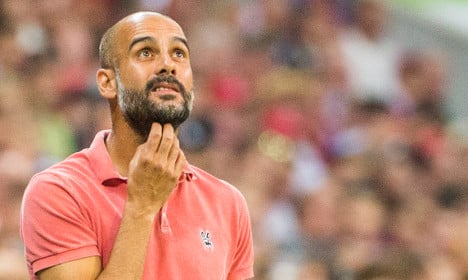 Guardiola's current contract expires at the end of the campaign and, having seen Bayern knocked out of the semi-finals in Europe in each of the past two seasons, he wants them to do at least as well this term.

Defending champions Bayern kick off the new German season on Friday at home to Hamburg as they bid to become the first team to win four consecutive Bundesliga titles.

They cruised to the title by a margin of 10 points from runners-up Wolfsburg last season, hammering Hamburg 8-0 along the way, but Guardiola is taking nothing for granted as his side prepare to host HSV again.

“We start again at 0-0 (against Hamburg). Before every game I look at the opponent, but 80 percent of my focus is on my team,” said the former Barcelona coach.

“The most important thing is what we do.

“Of course, I want to win the (Bundesliga) title. No one has won it four times (in a row) up until now and it would be a big step for the club, but we have some strong opponents.

“Apart from that, I want to reach the semi-finals of the Champions League with all my players fit. Then we'll see what happens.”

Both have shone in pre-season, and 24-year-old former Shakhtar Donetsk star Costa seems to have already secured the left-wing berth with no end to Franck Ribery's injury misery, the Frenchman not having played since March.

Costa boosts Bayern's options on the wings, with Arjen Robben just as injury-prone as Ribery, and he stole the show in Bayern's victories over AC Milan and Real Madrid in a pre-season tournament last week.

Guardiola has described Costa as “one of the best forwards in the world”.

“He (Costa) has a quality which is hard to find, the quality of dribbling,” he said.

“He has only been here a month, but he will be one of the best five forwards in the world.

“He won't be the best, because he is in Barcelona (Lionel Messi), but Douglas can achieve great things.”

Guardiola also said he expects Vidal, back in Germany where he previously played for Bayer Leverkusen, to add some bite to Bayern's midfield.

“He's a fighter, he always puts his foot to the floor, he has good feet and a good shot, as well as a good pass,” said Guardiola.

“Players like that are the future of this club.”

In addition, Guardiola confirmed Germany stars Mario Götze and Thomas Müller will not be leaving.

“I've known for two to three weeks that Mario stays and Thomas stays,” he said.

The 44-year-old is staying tight-lipped on his plans for next season, having been linked to both Manchester City and the Brazil national team once his Bayern contract expires.

But he poured cold water on the Selecao rumours on Thursday.

“The coach of the Brazilian national team has to be a Brazilian,” said the Spaniard in a press conference.