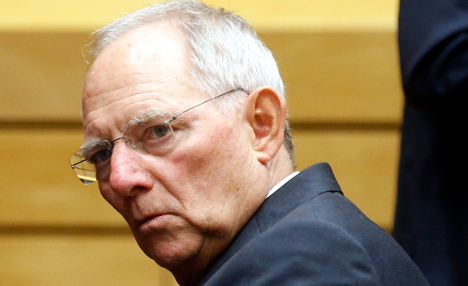 The man who will decide the fate of Europe? Photo: DPA

Eurozone finance ministers will meet on Friday to decide whether to accept the bailout package agreed between the government in Athens and negotiators for Greece's creditors – the European Union, International Monetary Fund and European Central Bank.

In Finland, which has previously joined Germany in being tough on Greece, a key parliamentary committee voted in favour of the plan in advance of the finance ministers' meeting, leaving Schäuble looking short of allies in Brussels.

Greek MPs voted in favour of the deal on Friday morning after an all-night debate after Prime Minister Alexis Tsipras warned that failing to take up the deal would mean “a return to crisis without end”.

Directing his comments at Schäuble, he said that rejecting the deal was “what certain people have been looking for systematically, and we have a responsibility to avert that.”

But Schäuble's biggest worries are whether the IMF will lend its full support to the deal, how sustainable Greece's debt is (i.e. whether it can ever be paid back in full) and the role of a planned trust fund that will be set up to privatize Greek public assets.

The first two of those questions are connected, with IMF officials warning on Thursday that Greece would need to have its debt burden reduced to make it sustainable.

“The IMF will evaluate its involvement in any further financing for Greece as soon as the steps for the Greek authorities' programme and debt restructuring have been made,” said Delia Velculescu, leader of the IMF's Greece team.

According to the IMF's statutes, the Fund can't lend money to a country which it regards as having an unsustainable debt burden.

That makes things tricky for the German government, which wants the IMF on board – Angela Merkel was the first to invite the Fund into the first Greek rescue in 2010 – but has bitterly resisted any form of debt restructuring.

Both the IMF and the Germans have cause for concern in the Greek government's progress on getting its budget in order, with the latest deal proposal containing much smaller requirements for “primary” budget surpluses (before debt repayments) than past drafts.

And Athens may not even manage those, with a 0.25 percent deficit expected this year in latest estimates, while 2016's budget may see a 0.5 percent surplus, down from the expected two.

Weak economic performance will give the IMF further cause for concern over Greece's ability to pay – and make Schäuble's task of keeping them on board that much harder.

Jumble sale may not raise enough

The planned-for privatization fund is supposed to raise €50 billion in the next three years, with half of the proceeds going to paying off money that was lent to Greek banks to stop them going under.

But German Finance Ministry officials doubt that so much money can be raised in the time available.

One European official told the Süddeutsche Zeitung that only around €6.5 billion could be made from a privatization programme.

“It wasn't possible to evaluate potential buildings and plots in the short time available,” he said.

Nevertheless, the sale of the Piraeus and Thessaloniki harbours is set to go through by October, while 14 regional airports will be taken over by German operator Fraport on long-term lease.

German MPs told to be ready to vote

Bundestag (German parliament) president Norbert Lammert sent out a letter to MPs this week warning them to be ready to return from holiday for an extraordinary debate on the Greek bailout next week.

But that debate will only happen if the finance ministers agree to the deal at their Friday meeting.

Otherwise, Greece may need a fresh bridge financing deal to keep the government limping along while negotiators thrash out the remaining details, which could be voted on by the Bundestag finance committee or the whole parliament, Norbert wrote.

After months of negotiation, the decision on whether to finally administer relief or keep Europe and the world on tenterhooks may come down to one man in a Brussels meeting room today.

But Wolfgang Schäuble has shown time and time again in the Greek crisis that he marches to the beat of no-one's drum but his own – even risking the wrath of his own Chancellor when his belief in fiscal rectitude is truly on the line.

Schäuble knows that it's not only him, or Merkel, or other finance ministers who have to believe the deal makes economic sense.

If he is to maintain his credibility and minimize the possible rebellion among MPs from Merkel's Christian Democratic Union (CDU), the deal will have to stack up in their eyes, too – which means keeping the IMF on board.

In the hours that remain before the finance ministers gather, everyone else involved will be hoping his stringent criteria have finally been met.