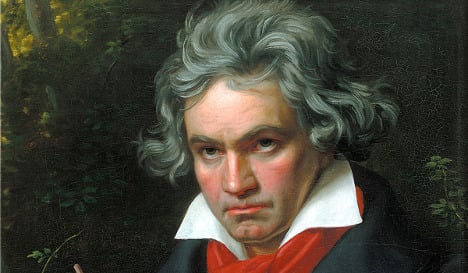 Also known as “Berthold the Black,” this legendary German alchemist supposedly put his hands (mainly the left one) to explosive use – by inventing gunpowder.

Schwarz is a somewhat controversial figure, and details of his life are a bit woolly. Some scholars believe he was Danish, some Greek. Meanwhile, some claim he never existed at all.

This German Renaissance painter grew up in a large family – he was the third child of between fourteen and eighteen siblings.

He shot to fame in his twenties for his incredible woodcut prints: a type of relief print created by “gouging” an image into a block of wood and rolling with ink.

Here's hoping the wood-carving tools were suitable for lefties.

He's probably the most famous German leftie of the lot – if another debatable one.

Beethoven's biographer Anton Schindler apparently recalled that the composer was a left-handed.

However, it's been difficult to prove – and the numerous portraits showing Beethoven with a quill, baton or walking stick in his right hand have kept the discussion alive to this day.

Feel free to join the debate and let us know what you find out.

Another early Romantic composer, Schumann apparently had a very good reason for being a leftie: in his twenties he chronically injured his right hand.

The injury forced Schumann to give up his dreams of becoming a piano virtuoso. Instead, he concentrated his efforts on composing – presumably learning to lead with his left hand.

This German certainly tried his (left) hand at a fair few things – and is famed for his work as a philosopher, cultural critic, poet, composer and Latin and Greek scholar.

In 1889, Nietzsche suffered a mental breakdown after seeing a horse being flogged in Turin. Running to the horse, he allegedly threw his arms around it to protect it before collapsing in the street.

He spent the last years of his life in the care of his sister Elisabeth.

Despite becoming a dual citizen when she married Danish-born Svend Sperling in 1933, the Tennis Hall of Fame still considers this leftie a German player.

Sperling was ranked in the World Top 10 between 1930 and 1939, peaking at World No.2 in 1936, and is one of only four women in history to win three consecutive French championship titles.

Another German tennis star, Sylvia Hanika was born in Munich.

She defeated World No. 2 Martina Navrátilová in New York in 1982, and is perhaps best known for winning the Year End Championships that year

Hanika retired in 1990 with five professional singles titles under her belt, as well as one doubles title.

He won silver in Barcelona in 1992, along with doubles partner Steffen Fetzner. Presumably the pair had figured out how to avoid bumping elbows well beforehand.

Busemann was named German Sports Personality of the Year 1996 after his Olympic decathlon silver medal win. He went on to win bronze in 1997.

However, in 2003 he retired aged just 28 due to a number of severe injuries. He now works as an athletics pundit on German television channel Das Erste

Footballer Mesut Özil earned the world's attention during the FIFA World Cup 2010 – and in August 2013, he officially became the most expensive football player of all time, moving to Arsenal for a record £42.5 million.

Of course, this probably also makes Özil the most expensive German leftie of all time.