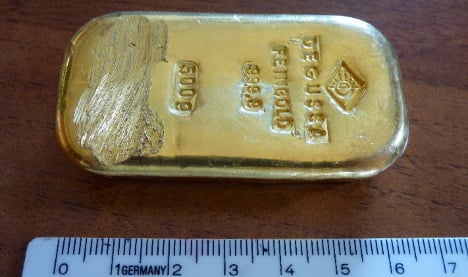 The gold bar found by a teenage girl swimming in Königssee. Photo: DPA.

The 16-year-old girl discovered the gold on Friday while swimming in the Königssee (King Lake) where she was on holiday, a police spokesman said.

She turned it over to the authorities, who were working to determine its origin.

Bars of gold usually have a number engraved into them, but police said this gold bar's number was at first sight not discernible. Specialists from the Bavarian State Criminal Police Office are working to make the number visible again.

Police divers scoured the lake floor for further valuables but did not find anything of note.

“If no rightful owner is found and the bar is not related to a crime, then the girl will probably be able to keep it,” the spokesman said.

Königssee, where the gold bar was found. Photo: DPA.