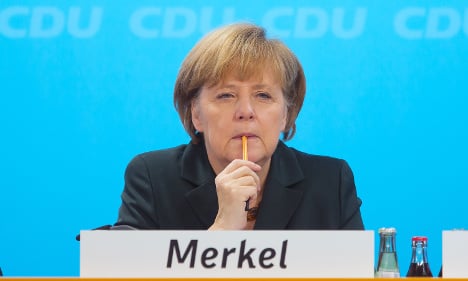 "Hmmm.... what if I just put all the blame on the Americans?" Photo: DPA

Officials had in recent months used the lack of American permission as an excuse not to release the list of targets passed by the NSA to the Bundesnachrichtendienst (BND), Germany's foreign intelligence agency.

But Die Zeit reported on Wednesday that while the White House had concerns about releasing the list to parliamentarians, US President Barack Obama's administration told the Germans that it was up to them to make the final decision.

American government sources also told Die Zeit that claims from German intelligence circles that the US would limit future intelligence co-operation with Germany if too much were revealed about the two agencies' relationship were “a fairy tale”.

The BND's close co-operation with the NSA has come under the spotlight in recent months after it was revealed that the spies had massively overstepped their bounds.

At the behest of the NSA, the agency targeted German businesses for economic espionage and surveilled communications of allied countries' officials, including close aides to the French President.

Government ministers claimed no knowledge of the illegal spying for years despite being fully aware of it, according to media reports earlier this year.

MPs in Germany, especially those involved in the parliamentary inquiry into surveillance by the NSA, have been clamouring to see the full list of 'selectors' – identifying information such as a phone number or email address used to target digital surveillance – ever since the latest revelations.

They want to check for other cases where the BND infringed on legal restrictions to its spying over the last two decades of co-operation with the NSA.

The appointment of a “trusted person”, former Supreme Court judge Kurt Graulich, to look at the files and report back to the NSA committee has not satisfied critics.

“The government has knowingly lied to parliament and the public so as to sweep its own involvement in the scandal under the rug,” Green party MP and NSA inquiry member Konstantin von Notz told Die Zeit.

“Of course it's a scandal, but I'm not surprised,” Linke (Left Party) MP on the NSA inquiry Martina Renner told the newspaper.

“The government's claim that the publication of the list depended on the USA is impossible for us to check. That makes it wonderfully suited to hindering our work in the inquiry committee and distracting the public's attention away from decisive points.”

SEE ALSO: Two years after Snowden: what we know now