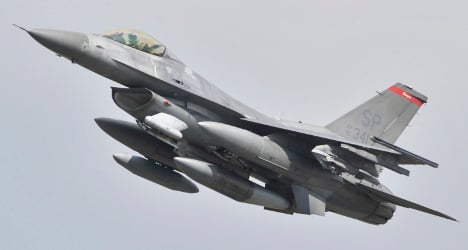 An F-16 fighter of the type flown by the 52nd Fighter Wing. File Photo: DPA

A statement from the 52nd Fighter Wing at Spangdahlem air base in western Germany said that the plane, part of the 480th Fighter Squadron, crashed at 9.38 am and that the pilot was able to eject safely.

He also managed to jettison the plane's external fuel tanks safely over an unpopulated area.

Bavarian police told AFP that a passerby found the slightly injured pilot “in a wooded area near the crash site and delivered him into the hands of rescue services.”

The F-16 was carrying six 25-pound (12 kilogramme) training munitions, but no live ordnance.

One man who was near the crash site was harmed slightly by fumes in the smoke from the burning wreckage, the Süddeutsche Zeitung reported.

The crash happened while the aircraft, which had taken off from Spangdahlem, was on a training flight at US Army Garrison Bavaria in Grafenwöhr.

Flying operations at the 52nd Fighter Wing have been cancelled for the next 24 hours for safety reasons.

The reason for the crash remains unclear, but is “under investigation,” the Air Force statement said.

Police told Bayerische Rundfunk that the fires had been extinguished by midday. US military first responders are working with the German authorities and have established a 350-metre cordon around the crash site. US personnel near the scene of the crash. Photo:DPA

Around 400 emergency responders from the surrounding communities are on the scene.

The pilot had only suffered light injuries and was being treated by a doctor.

Firefighters are still on the scene, making sure that there is no possibility of further flames spreading to the woods from the fuel-laden aircraft. Roads through the forest are blocked to traffic across a wide area.

One man who was gathering berries in the forest at the time told nordbayern.de that he had seen the jets flying overhead in formation before he smelled fire and watched the planes circle above one point nearby.

Another man said that the jet had been emitting sparks while diving towards the ground. He said it appeared that the pilot had tried several times to restart the engine.

The crash site was just 300 metres away from a group of houses.

Roman Markert, deputy police chief in nearby Pegnitz, told nordbayern.de that the aircraft had taken off from the military training ground at Grafenwöhr.

The Grafenwöhr training base in eastern Bavaria is one of the largest US Army training areas outside of the United States and the largest multinational training area in Europe with around 10,000 American soldiers and 3,000 German civilian employees.

American soldiers supporting NATO missions train alongside other citizens of other allied countries and a total of 40,000 Americans live in the area.

Markert added that the plane had crashed while executing a manoeuvre.

Correction: This article originally cited a spokesman for the 50th Fighter Wing, not the 52nd. We regret the error.