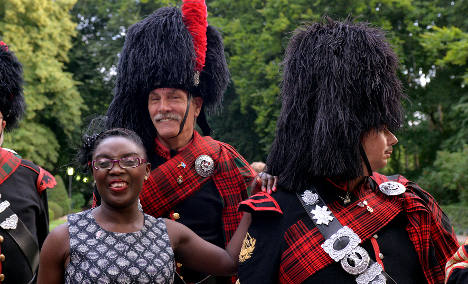 Victoria Ade-Genschow, aka the British Berliner, with some pipers during Queen Elizabeth II's visit in June. Photo: Pascale Scerbo Sarro

Things all moved very fast for Victoria after she got the call from RBB (Rundfunk Berlin-Brandenburg).

“My husband sent me a message to say that there's a phone call from a TV show, and I was like, yeah right,” she remembers over tall, cold wheat beers in a sunny street in the northeastern Prenzlauer Berg district.

In fact, it shouldn't have been that hard to believe. Although Victoria only started blogging about a year and a half ago – until then she had been busy settling in and starting to raise her son – she's built up a serious profile since then.

“I called them back and asked, 'how did you find me?' One person found me through my blog, and another had gone to the British Embassy and asked around. They know me there.”

Victoria's familiar style and palpable passion for whatever she writes about – whether it's the German capital or her travels further afield – have made her blog a hit with expats, prospective tourists and Germans alike.

“A lot of Germans read the blog,” she says, with obvious surprise. “When I started I wasn't writing for Germans, I thought I'd be writing for English speakers who don't live in Germany, but might want to, or might want to visit.”

In fact, she's ended up with a global audience – “a lot of Germans, a lot of Russians, Europeans, Americans, many Brits, people in Thailand and India” – hanging on her every word.

“RBB saw a post I wrote about being British last year. Every now and then I write about what it's like to be British here, you know, how you can be British – British music, British theatre, what it is to be a British person.

“And of course there's no time when I write about being British without the Queen popping up somewhere along the way.”

'Could you do it in German?'

Victoria was quickly enlisted into doing a documentary about Brits in Berlin for RBB TV, and went for almost the entire production meeting – talking about what the interviews would cover and her past experience (or lack thereof) in broadcast – before the realization hit her that she'd be speaking in German.

“They said, we could do it in English, but then we'd have to do a voiceover – could you do it in German? I was like, eeek!” Victoria recalled.

“I wasn't confident, and I asked if I could take a couple of days to talk it over with my husband and my friends. And they all said – do it in German, do it in German!” In the end, Victoria produced a bravura performance, thanks to the support of some friends she brought along for a Kreuzberg walkabout (“I put an announcement out on Facebook asking for someone to be my PA, because I didn't want to look like a loser”) topped off with a visit to the English theatre and to a Scottish pub.

“Most of my Berlin friends said they've never heard me speak so much German until I did that documentary – and I do speak German, you know, I speak quite well.”

From documentary to live TV

That was lucky, because the real, unexpected challenge was yet to come.

After the documentary was broadcast on June 23rd, Victoria was slated to appear as a guest on RBB's live coverage of the royal visit.

But her sparkling German conversation earlier in the week ended up pushing her into a much bigger role.

“They'd seen what had been happening, that I seemed to be OK on screen, quite competent, quite quick, they said they'd like me to be the sidekick of the moderator,” she remembered.

“That had me freaking out, I didn't know anything about it, I don't watch a lot of German TV. I told all my friends, and they all said 'It's a big deal'. It was really scary.”

SEE ALSO: As it happened: The Queen's first day in Berlin

She arrived in the Tiergarten's English garden to find a set festooned with wires, cameras and lights, a professional makeup studio, and refreshments laid on in some style.

Victoria enjoyed being “coddled” for a little while before being whisked onto the stage and counted down from ten. “I'd done some big-time cramming beforehand. I mean, some things I knew already, because I like the monarchy, and others I thought, I've gotta get up to speed on this,” she remembered.

By the time she was on the podium, she couldn't even think about how well she was speaking German – only about how everything else was coming across.

“They had high tea for me, specifically for me, but I couldn't eat a single thing. I was so scared because of my lipstick on the cup, so I had one sip and I kept moving it around to the other side so the camera wouldn't see!” Victoria said, laughing uproariously.

“I didn't have any of the sandwiches or anything at all.”

She shivered her way through hours of cold weather and rain, maintaining her stiff upper lip despite her flimsy summer dress and enjoying some “typically British” bagpipes, children from the British international school singing, and an Australian woman impersonating Elizabeth II.

“They were asking which hand the Queen puts her handbag on, what kind of activities she does, how does she keep fit, how does she feel about coming to Germany, things like that. What do the young people think about the Queen, and so on.”

In the end, things went swimmingly – in part just because being British in Germany can often be an easy ride.

“Being British in Germany is a big deal. I think we get more respect than other English-speaking nationalities,” she pointed out as some justification for her strenuous efforts to keep up appearances.

“We love each other and we dislike each other, but the thing that they love is the monarchy. They don't like the sport, the food, the language, possibly, but there's a lot of respect for the Queen.”

And the Berliners didn't disappoint with their welcome for Her Maj'.

“The red carpet came out, lots of people who weren't even into the Queen were asking about the visit, I published the schedule the embassy sent out and people were sending in more information, I got a lot of help from people who were interested,” Victoria said.

A more modern kind of British

But there's a serious contrast between the attraction of the dated, fussy and aristocratic world inhabited by the monarch and the reason why Victoria ended up on Berliners' TV screens.

“And it absolutely had to do with my being black. That opens every door.

“Here I am absolutely special, in a positive way. First of all, I'm British, that's a big plus there, secondly I'm dark-skinned and not a lot of people within that sphere [of the media] happen to be the same colour. Three, I'm well-spoken – that doesn't hurt either. And then I'm female, that helps – and the combination, why not?”

The irony is that the woman the TV producers picked as their archetypal modern Brit has absolutely no interest in going back to the UK.

“When you live abroad for a large amount of time, it's enormously difficult to live in England.

“When I lived in Prague, I actually said I was leaving for six weeks and came back two years later. I went back home and I couldn't settle,” she explained.

Born and bred in Manchester, with a trace of Mancunian still lingering in her pronunciations of the words “mum” or “butter”, it was a fateful visit to the north of England that set Victoria's heart against moving home.

“My family are wonderful, but the thing is I don't have friends in the north, all my friends are in the south or they're across the world somewhere.

“And I went to visit a family friend, and this woman spent two hours talking about her washing machine, and that's when I thought, that is it. That is it. I'm not doing this.”

A Brit at heart

But despite her love of the great wide world – and Berlin, and her German husband and dual-nationality son – Victoria will always feel herself a Brit at heart.

“Britain is still my country and I make no qualms about that. I'm still British, even when I got married I would never change my nationality, never in a million years.”

She still goes back every year, bringing her son to visit different parts of the UK she has known and loved, and hopes one day to send him to school there for a year.

“The full English experience,” Victoria declared, “uniform, private school, then come back and see how good you've got it in Berlin.”

As for her own future, Victoria is confident that she can accomplish anything she sets her mind to.

“This has shown what I can do. I've been surprised with myself, because I've had to speak in German on live TV. I'm not trained, I'm not an actor, it was just, let's talk, don't be too nervous, let's do it.

“I'm sure there's gonna be someone, somewhere, who'll say, you know what, we like her, we should do something.”