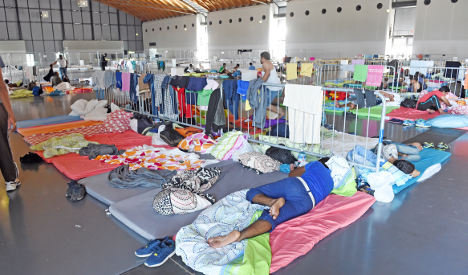 Refugees quartered in a convention centre in Karlsruhe. Photo: DPA

“Germany Sweden and Austria take on most of the refugees. On the other hand, there are countries that take no, or very few, refugees. But we need a fair balancing,” Gabriel told Bild on Monday.

He added that the refugee question threatened to undermine the humaneness of the European Union.

“Some of the EU states think of Europe just as some kind of profiteering community, where you only co-operate if there's money. And where you jump out when it's about responsibility.

“People who behave like that will destroy Europe,” the Social-Democratic Party (SPD) politician said.

EU leaders have battled back and forth for months on plans to share responsibility through a quota system to redistribute the thousands of asylum-seekers arriving in Europe.

EU Migration ministers failed last month to reach their targets for relocation after several countries backed down from the quota plan.

Germany has shouldered a significant amount of the responsibility with the number of asylum-seekers arriving in the country expected to more than double in 2015 to 450,000, up from 200,000 in 2014.

The country's elevated numbers are down to a number of factors.

Several travel routes into Europe converge in southern Germany, from the Middle East and the Balkans as well as from Africa.

Many refugees move on from more peripheral EU countries, such as Greece or Italy, because of the massive backlog in processing applications there and the lack of resources.

Germany, by contrast, is seen as having a stronger economy that's more likely to offer opportunities for work – although its immigration and asylum authorities are overloaded and the govenrment recently announced plans to recruit thousands more agents to process all the claims.

The number of asylum applications filed in July reached an all-time high of 79,000 applicants.

Recent European Commission figures showed that Germany was way out in front of the rest of the EU when it came to the number of asylum applications in the first three months of 2015, receiving 39.6 percent of the Union's 185,000 new claims.

Broken down by applications per head of population, Hungary leads the field, followed by Sweden, Austria and Germany.

Along with the new arrivals making their first claims, Germany also hosts many people waiting for their cases to be decided.

The total number of asylum seekers in Germany could be as high as 300,000, figures reported by Die Welt last week show.

Large numbers of people arriving to claim asylum has led to political uproar and outbreaks of violence in different parts of Germany.

Some people have organized demonstrations against refugees being housed in their towns, while there have been repeated fire attacks and shootings against refugee accommodation.

Security chiefs believe that new far-right movements are behind some of the attacks, which last week prompted TV anchor Anja Reschke to unleash a diatribe against “little racist nobodies” in a comment segment for the Tagesschau TV news.