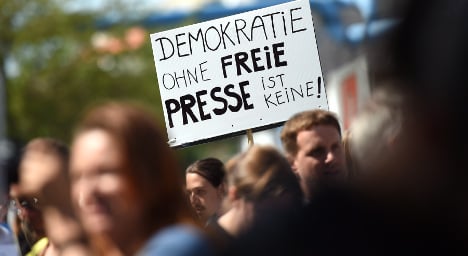 "No democracy without a free press" reads a banner at a pro-Netzpolitik demo on Saturday August 1st. Photo: DPA

Germany's intelligence agency – the Federal Office the Protection of the Constitution – in its complaint “directed attention to members of parliament” and “explicitly names” a nine-member panel, said an excerpt of an article from Saturday's edition of Der Spiegel.

News of Germany's first media treason investigation in over half a century — which targets the blog Netzpolitik.org (Net politics) for publishing the agency's Internet surveillance plans — has sparked a storm of press freedom protests.

Der Spiegel reported that the agency's complaint “against persons unknown” named not just the bloggers but also a parliamentary panel that had access to the leaked documents.

The intelligence agency said in March and April letters to police seen by AFP that the blog report in large parts matches “word for word” a paper it had prepared for the parliamentary panel.

In a blog post published on Friday, Netzpolitik.org editor Markus Beckedahl demanded that the treason investigation into himself and his colleague Andre Meister be ended officially, saying that the journalists remain under legal threat.

“Former Chief Prosecutor [Harald] Range said last Friday that the investigation into us would be put on hold,” Beckedahl wrote.

“According to the law governing criminal investigations (Strafprozessordnung, StPO), there is no such thing as an investigation 'being on hold'. A promise not to take measures… is worth precisely nothing.”

The authorities could change their mind at any time, leaving himself and his colleagues under a constant threat of legal action, Beckedahl insists.

He is also concerned that he and his colleagues may be under surveillance at work and in their private lives – something spokespeople for the Interior Ministry and Justice Ministry refused to rule out when he asked them.

“In treason investigations, the authorities have the complete arsenal of surveillance measures at their disposal that was conceived for terrorists and the worst of criminals,” Beckedahl wrote.

“And we have always warned against the fact that these measures could also be misused. Now we are confronted with the fact that we ourselves have become victims… that isn't a nice feeling.”

As well as an end to the investigation, Beckedahl wants copies of any files obtained through surveillance of himself and his colleagues before they are deleted.

He and his team have a further list of demands including an “acknowledgement that the accusation of treason was absurd,” a clarification of who bears ultimate responsibility for the allegations, and improvements to Germany's laws on whistle-blowing.

Netzpolitik was under investigation for two incidents when it published classified documents in February and April this year.

The files revealed plans for surveillance of digital networks and social media by the intelligence service.

Range used an interview with the Frankfurter Allgemeine Zeitung on Friday to defend the decision to launch a treason investigation into digital policy blog Netzpolitik, which saw him fired by the government earlier this week.

“I didn't want to slink out of the place like a beaten dog, but walk upright through the door – and to avoid making myself criminally liable,” Range told the newspaper on Friday. Range criticized Justice Minister Heiko Maas' move to end an independent analysis to determine whether the blog's publication of classified documents was a crime.

“Influencing investigations because their outcome isn't politically convenient is an insufferable encroachment on the independence of the judiciary,” he said.

News of Range's dismissal came on the same day that Maas shut down the external expert evaluation of the case.

The former top prosecutor justified launching an official investigation into Netzpolitik by saying that he couldn't commission the independent analysis without one.

But Beckedahl contested these statements in his Friday blog post, writing that “experts told us that the chief prosecutor could have ordered an evaluation without launching an investigation… nowhere in the StPO does it say that an analysis can only be obtained when an investigation is officially launched.”

Minister still in line of fire

Maas has not drawn a line under the affair by firing Range, with both the Minister himself and the head of the intelligence agency, Hans-Georg Maaßen, targeted for criticism from different parts of the political spectrum.

The left and the liberal Free Democratic Party (FDP) have called for Maaßen's resignation, while Maas has been critized from left and right for intervening too late and too heavy-handedly.

“The facts belong on the parliament table, so that MPs can make up their own minds,” Linke MP Ulla Jelpke said.